I get distracted easily. Don’t even try to pretend it’s not true.

So when I want to focus on writing, one of the first things I need to do is pare away my distractions. I’m not much of a TV guy, but I either stop watching or limit myself to watching in lull periods, like the two episodes of Young Justice I allow myself on Saturday mornings. Video games are my crack, so I make sure not to have any hanging over my head that can suck me in for hours on end; right now, all I have in the PS4 is Bloodborne, and I can only play that for maybe 30 minutes before becoming so stressed and upset that I can’t continue. Social engagements and beer… well, those are important to me, but as a project gets more and more pressing, those things gradually drop down the priority list.

And then there are roleplaying games.

I started a new RPG campaign this month, one I plan to run every two weeks, because I am a goddamn idiot.

Shadows of New Jerusalem is an urban fantasy campaign that I’m hoping to run for the rest of 2017. (Maybe into 2018, if my players are keen.) This is a concept I’ve actually talked about before on the blog, way back in… jesus shit, back in 2013. (although it’s morphed a lot since then.)

My original plan for the game was an ‘anthology’ game using the Chronicles of Darkness setting, but I gave up on that after some of 2016’s games didn’t pan out so well. I felt that I wanted a game with very strong player buy-in and minimal upfront reading/effort – which suggested a much more collaborative approach was needed.

So I got a group together, pitched a basic concept (urban fantasy, Fate system) and we went around coming up with ideas about what we did and didn’t want to see in the game, as per the whiteboard below. After some more back and forth, we had a rough sketch of a game about a family of dodgy artefact merchants, scavenging for mystic items and doing deals with otherworldly forces, along with some initial plot hooks and NPC names. 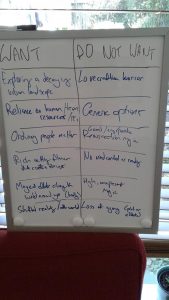 There’s plenty of conceptual and tonal fodder there, and it didn’t take me long to put together some ideas that would be enough to launch a game and run with, developing them as we play.

But then the high kicks in.

Hey, maybe I should define what non-mortal magic can and can’t do. Or pin down some location interconnections. Oh man, I should definitely stat out half-a-dozen NPCs and creatures for each faction so that I have someone/thing to hand whenever the need arises! How about I create specific Photoshop filters and processes, then make like 50 individual pieces of character and setting art!

And obviously I need to write aaaaalllllll that stuff down so that it makes sense to someone who isn’t me!

This urge to fill in all the gaps ahead of the game, to nail down every possible option so that I have what I need at all times… it’s a powerful urge, and it’s utterly wrong-headed. Especially in a game where a lot of that detail is either a) unimportant, or b) supposed to be created collaboratively with my players.

Making stuff is great – if it gets used.

Making stuff for its own sake? That’s just another distraction.

It’s the same for me and writing. I know there are authors who do tonnes of worldbuilding ahead of time, and use their rock-solid grasp on their setting as the framework for choosing and shaping their stories, and I respect that. But I don’t understand it.

For me, story is something that comes together through decisions and in-the-moment choices, rather than through planning. If a story needs a distinct world, I’ll do a little rough work at the start, but not a lot – you’ve pretty much seen the entirety of my notes and planning for both Raven’s Blood and the Obituarist books here on the blog over the last couple of years. The bare minimum I need to know what things look and sound like in chapter 1, and then make it up as I go along.

When I get sidelined by worldbuilding, I’m not actually telling/making stories. I have a bad habit of forgetting that when it comes to games, but I’m trying to keep it under control. I’m just grateful that when it comes to writing – arguably the space where things need to be more coherent and polished at the start, I know – I’m mostly able to ignore that urge and just charge headlong at things like a loon.

The Obituarist III continues apace – slowly than I would like, yes, but I’m on it.

And if you’re interested in seeing whether the Shadow family will outwit the Butcher Bishop and the schemes of Valentine, you can follow our New Jerusalem game over on Obsidian Portal.

It’ll be cool. I promise. 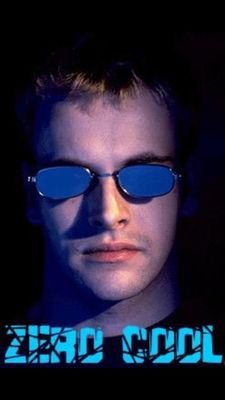