I’ve been listening to The Mountain Goats a lot this year.

I discovered them very late – only a couple of years ago, when I was told about their wrestling-themed album Beat the Champ. I checked it out because, you know, wrestling, and I found a lot to like, so I started dipping my toes in some of their other works.

Still, it’s only been in the last few weeks that I went further into their back catalogue, and only about a week ago when I listened to their 2005 album The Sunset Tree, and the song ‘This Year’. Like a lot of John Darnielle’s songs, it’s autobiographical to some extent, and based in surviving life with his abusive stepfather. (Given my own father issues, it’s no wonder his songs strike a chord with me.)

Anyway, the song has a short but powerful chorus:

That got into my head. And wouldn’t come out.

On Thursday, four days ago, I found out that the Melbourne Writers Festival was running a literary tattoo parlour over the weekend.

And forty hours later, this happened. 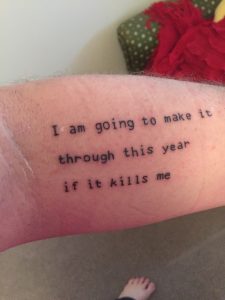 The last couple of years have been rough for me. 2017 was pretty much lost to depression and self-doubt; 2018 has been lost to day-job workload, which has dropped slightly since July but not as much as I had hoped. That’s two years where I’ve struggled to find the motivation or energy to do any writing; two years where I’ve been contemplating whether it’s worth bothering to write any more at all.

The anti-depressants helped – I’ve stopped taking them now, but I haven’t fallen back into that hole and I don’t think I will again. The prospect of a less insane workload has helped, even though it hasn’t arrived yet.

And I think this will help. Having a pocket pep-talk that I can look to, day after day, in case I need it. Which I probably will.

But it’s not only that.

For a long time I’ve been hung up on ideas of preparedness and perfection. I’ve told myself that there’s no point in writing right at the moment, because I need to get the idea right, do more research, find the voice – hold back, don’t rush, wait a while. And that’s led to doing nothing much in 2018 except being indecisive, playing video games and going to bed early.

Then I went from zero to new tattoo in less than two days, and a tattoo of lyrics I’d heard only recently at that. Which reminded me that I don’t have to hold back until everything is perfect; sometimes right now is better than perfect. And it reminded me that I can actually be decisive – that I like being decisive, and getting shit done.

I like it more than stasis, that’s for fucking sure.

In the immortal words of actual cannibal Shia Labeouf: 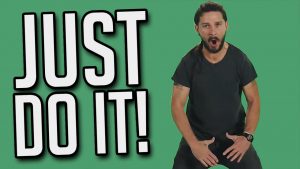 I’d love to say ‘no more faffing about, back to writing immediately!’, but that’s not how it works. I still have a ludicrous workload to manage until at least the end of November, and there are too many days when I literally don’t have time to write.

But there are also days when I have some time. And I’m ready to use that time.

The Obituarist III has been half-done for god, too freakin’ long now. I probably need about 30-odd hours to finish the core draft, then another 10-15 hours of revision and polishing once my editor and readers are done with it. That’s not so long that I can’t get it done before the end of the year.

So that’s the new plan. And I’m going to keep quiet on here until that plan comes through – there’s not much value in sporadic low-content blogging before that point, after all. Not when I could use that time to get the job done.

I think this is it for new tattoos for a while, and for Mountain Goats tatts in particular. I don’t want to be one of those guys who’s just too into The Mountain Goats. You know the type.

I’m going to make it through this year.

If it kills me.

3 replies on “This year”

It’s one of those lines that gets into your head.

Glad to hear things are eating of for your – or going to, at least.

Hoorah for writing on the horizon, and making it through the year. =)

Sounds like you’ve got this sorted. And if you forget how you sorted it, read this as well as the tatt. This is also me and music so you’ve just given me a kick up the bum. Love you