I’m making kind of a habit of disappearing for long periods.

Maybe you thought I was dead. 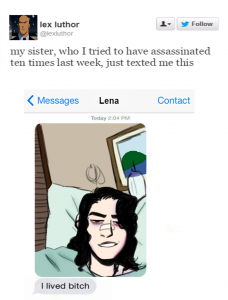 Nah. My computer was, though, for close to three months, during which time I shelled out a bunch of money to get files recovered, Googled every step required to take the PC apart and put it back together, made lists of all the software I needed to installed and generally got no writing done.

And while all that was happening, my day job went through a big shake up and a bunch of people got laid off. I didn’t, and my job changed to have more of a writing focus, which is a plus – but my workload went through the roof, and it hasn’t stopped climbing yet. Which explains why I spent my entire weekend in the office, shooting videos and developing content, and don’t have any downtime scheduled until maybe next weekend. If I’m lucky.

So I’ve had no time, energy or spoons for writing. Or blogging. Or doing much more than sleeping of late. And I’m not getting enough of that.

Still. I ain’t dead yet. And after I nursemaid four textbooks off to print in the next three weeks, I’ll hopefully get a chance to fall down, go boom, get back up again and revise my writing plans for the year.

I’ll tell you about that when it happens.

One reply on “Not waving, drowning (glub glub glub)”

Holy heck, dude. Hoping things ease up, technologically and in the job.