Once again I’ve ventured into the world of professional wrestling and colourful grappling to learn its storytelling techniques, and once again it’s taken me like two weeks to come back and write about it. Pretty slack of me, I know. Will this improve once I return to non-powerbomb-focused content, i.e. after this week’s post? We’ll talk about that next time.

This time, though, I want to look at a third wrestling promotion, the one that is probably my favourite now that I’m watching wrestling again – a promotion that has quickly developed its own identity and unique style while staking out a storytelling space somewhere between the extremes of WWE’s ‘realism’ and Chikara’s out-and-out fantasy.

I’m talking, of course, about the high-octane action of Lucha Underground. 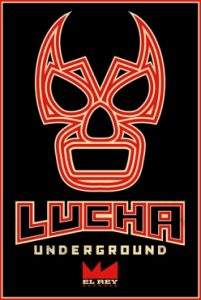 Lucha Underground is a televised promotion created and broadcast on the El Ray Network, a US cable channel, that has just kicked off its third most-of-a-year season. It’s connected with Mexico’s respected AAA promotion, and features a lot of Mexican wrestlers and lucha libra influences. Matches tend to have a lot of high-flying action and/or power-based mat wrestling, with a bit more blood, weaponry and brawling-through-the-audience than you’ll see in WWE shows. Characters range from traditional competitive athletes through a variety of masked luchadors (including my personal favourite heel, the deer-head-wearing King Cuerno) to outright horror/fantasy figures. (It’s a promotion where a dragon-man wrestled an alien superhero five shows in a row, and it was awesome.) 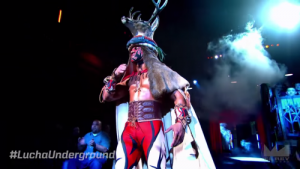 And from a storytelling perspective, they do a number of other things that set them apart from other promotions and provide useful lessons for writers.

The thing that immediately stands out when you watch an episode of Lucha Underground is that it looks like a telenovela or soap opera rather than a wrestling show. (I mean, other than all the wrestling.) Backstage scenes are lit and shot like moody dramas, and they’re all vignettes and fictional in-character scenes rather than promos or to-camera interviews. (They have occasional sit-down interviews but film them differently.) There’s also an unusual cinematography for wrestling action, thanks to the use of an overhead camera as well as the usual ringside views. All of this combines to create a fresh, distinct voice for the show, one that captures its pulpy grindhouse story style, encourages viewers to suspend their disbelief and keeps them coming back to witness more plot developments. (Lesson: a unique voice may be the single most important thing a writer can develop; more than any other skill, it’s what captures readers attention and keeps it on you.)

When you can see the wires

Lucha libre is a thrilling style of wrestling to watch – high-flying, high-energy, full of impressive spots and sequences. But it’s also a style that relies on orchestration and cooperation, with wrestlers working together to pull off those spots and sequences. If done well, you never notice the wrestlers waiting for the spot or holding their opponents’s hand in position – but if you do notice, that’s a problem. Nothing pulls me out of a match faster than seeing three guys hang around at the side of the ring, waiting for their opponent to come over the ropes and land on them (except maybe a wrestler who’s meant to be unconscious adjust his tights and mask in full view of the audience). And this happens in pretty much every Lucha Underground episode, damaging the tension of the match and my engagement with it. (Lesson: Action scenes need to feel natural and organic, no matter how much orchestration goes into them. Don’t let logic gaps or too-overt direction creep into your fight writing, or readers will see the wires and lose engagement.) 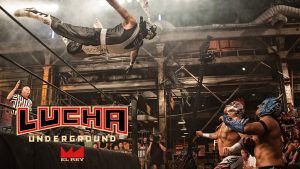 Setting your tone and sticking with it

Lucha Underground eschews both pure escapism and pure realism to stake out a space somewhere in the middle. Alongside stories of athletes fighting for belts or settling personal grudges, there are arcs about mystical prophecies, warring lucha families, monsters in the basement and a witch recruiting an army of death-cultists to take over an Aztec temple. It all works because there’s a consistent tone across the board – a pulpy, grindhouse kind of action-adventure/urban fantasy-horror that can accommodate both straight and weird stories without much difficulty. (It’s kind of like how From Dusk ’til Dawn could fit both crime and horror action – not surprising, since Robert Rodriguez is an executive producer of LU.) This tonal scope lets shows veer from the normal to the weird and back without losing audience buy-in, and is also a heap of fun. (Lesson: you can fit a lot of different ideas together in a story so long as you have tonal consistency – so work out how you want your stories to feel, then go crazy on plot points that support that feel.)

Flabby in the middle

In wresting they call it the build – that mounting sense of tension and drama that pays off in the final match, after weeks and months of feuding and escalation. It’s the thing that sets up the stakes for the fight – and it’s something that Lucha Underground mess up about half the time, maybe more. Too many angles (storylines) fall apart due to injury or external factors, while others are cobbled together on the fly to justify a match ten minutes later (check out fightpractice.com for more).

(Exhibit A: A match built up between Texano and Chavo Guerrero for the end of Season 1 that could have been great – but when Chavo got injured, they quickly subbed in over-the-hill wrestler Blue Demon Jr rather than cancel the match, and the outcome was not good.) Even if what’s in the ring is solid, a weak build makes it feel pointless – and when the match is lacklustre, the whole thing falls apart. (Lesson: Short, medium and long-term pacing all matter, and it’s rarely good enough to get two out of three.)

Hit that payoff and all is forgiven

But having said that – when Lucha Underground get the build right, they blow the roof off. Their in-ring pacing is almost always really solid, and when it’s embedded in the overall tone and backed up by rising tension and clear stakes, the matches can be so amazing that you forgive every other misstep and rush-job. And there’s no better example than 2015’s brutal and riveting ‘Grave Consequences’ casket match between the high-flying Fenix and the unstoppable murder-machine Mil Muertes. I wish I could show you the whole match, but hopefully these edited highlights show you just how engaging and fascinating the LU take on wrestling can be.

(Lesson: Good is better than perfect, and any story that grabs the reader and keeps them engaged is doing just fine, even if it’s not 100% what you thought or hoped it might be. Take the win.)

Lucha Underground airs on El Rey in the US, as noted earlier, but it’s not on any streaming services. You can buy and download seasons on iTunes as they come out – so long as you’re using the US iTunes store. If you’re in Australia, or indeed any non-US country, then… well, tough. I don’t know why El Rey are so determined not to accept money from international fans, but they seem intractable opposed to taking our $35. So if you want to watch it, there’s only one option – fly to the US, borrow a local iTunes account and credit card, buy the season, save it to a USB and then fly back to watch it at your leisure. I mean, that’s what I obviously did. Anything else would have been illegal and wrong.

If you can afford the plane ticket – or magically find some other way to obtain US-only content – and want to see some really strong wrestling shows (and the occasional weak one), Lucha Underground gets all the thumbs up. 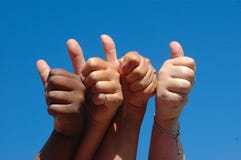 Okay, I think I’m done talking about wrestling now. If you’re into it, I hope this has been fun; if you’re not, I hope it’s demonstrated that almost any kind of performance or genre can have range, variation and complexity to it. Plus crazy bumps.

Come back next week for a trip to PLANET OVERSHARE!

Population: you and me!

Sitting waaaaaaaaay too close together