But we all do things against our better judgement, and that’s why I spent most of the last two months slouched on the mezzanine, playing the absolute shit out of Dragon Age: Inquisition when I should have been writing regular blog posts, or indeed books. 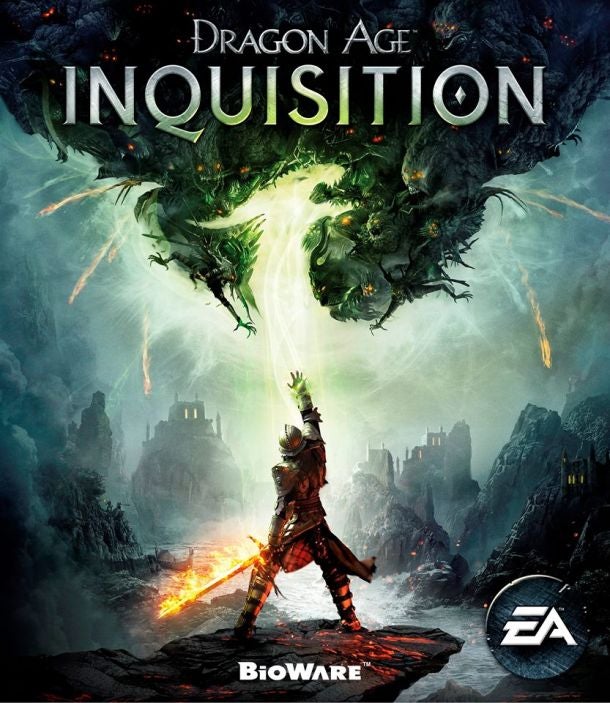 On the other hand, playing DAI for so long – more than 100 hours! – made me think an awful lot about what worked, what didn’t, which parts of its epic storyline were compelling and which made me want to drink bleach. And so, much as I did with Arkham City and Guild Wars II (at length), I’d like to look at the game from a writing perspective, and turn my timewasting into a set of storytelling lessons.

This is how I justify my life, and the wasting thereof. Please indulge me.

(WARNING: Spoilers! Not a huge amount, but some!)

Screw with expectations, but then live up to them

Dragon Age: Origins amassed a massive body of fans (myself included) who loved its story and characters; DA2 had problems, but still built on that foundation and set up a situation that the new game needed to follow up. So DAI launched with many ideas about what it should be and what it should include – and then struck its own balance between those preconceived ideas and desires and a variety of new concepts and content, taking the franchise in new directions (some of which are successful). Take the same attitude to your writing – don’t be hidebound by what readers think you’re going to write, but surprise them by striking out in a new direction while still writing with the same craft and level of polish. Readers may think they want The Comfortable Further Adventures of X, but they’re really attracted to your voice and skill; give them more of that, while fucking with expectations, and they will (hopefully) love you for it.

Wherever you set your stakes, make them matter

DAI is filled with adventures large and small, some of which feel urgent and engaging and some of which do not. The ones that work have genuine consequences and payoffs – expressed in character/story terms – while the ones that don’t just give you better equipment and no-one discusses them again. The first lot of quests are the ones that stay with me and made the game interesting; the second are already forgotten. So too with your own plotlines; stakes need to engage the reader on a personal level, not just be a way of making your character collect plot tokens or better equipment for the important scenes.

Endings need to matter as well

Someone please travel back in time and explain this to the DAI development team.

Worldbuilding needs to be a sometimes food

Writers love worldbuilding, and readers/players love the feeling that they’re engaged in an almost-real place. But you can convey that feeling with a light touch, and by dropping details into scenes so that readers take them on board almost without noticing. Or, like DAI, you can have chunk after chunk of exposition scattered around the narrative space, communicated in books, letters, paintings, mosaics, conversations and dream sequences, so that you have to stop engaging with the story/game in order to read them.

I’m sure there are people who love this level of detail, for whom learning about the world of Thedas is the entire point of the game. I’m just saying that they’re wrong. And as writers, those are not the readers you need to be serving.

Go for killer, not filler

Inquisition positions your character as someone of immense importance, a world-changer who is the only hope of stopping the apocalypse. It also asks you to collect hunks of iron, pick flowers, kill assorted bandits and generally piss-fart around the world doing micro-errands in true MMO style. The result is a massive disjunct between how you’re supposed to see yourself and how you actually behave, and a whole lot of boring crap to do over that 100+ hours of playtime. Do not do this in your fiction! Do not make characters perform meaningless or boring-to-the-reader tasks just because they’re ‘realistic’ or the connective tissue you think is needed between the interesting bits! If you write scenes that are engaging and meaningful, you can bridge them with a paragraph or a handwave; better that than a scene where your hero slowly hunts and butchers mountain goats to make blankets for a bunch of people that she never talks to again.

It always comes back to character

People focus on NPCs and relationships as the selling points of BioWare games, and that’s because they’re (mostly) the strongest and most engaging part. DAI is no different, and the game is at its best when you’re connecting with those characters, exploring their stories and deciding how your priorities align with theirs. The character mix isn’t as strong as in the two previous games – there are too many NPCs, some of whom (well, mostly Sera) are boring or terrible – but there are many good characters who will draw you in. In prose, you need to make readers care about your characters, their relationships and their journeys; do that  and the story and worldbuilding can almost take care of itself. So don’t run out of character stuff

I played DAI for nearly 110 hours. The first 70-odd hours were (on the whole) terrific, because I punched monsters and explored the Deep Roads and made swords AND THEN I went and told my special digital friends about it. We laughed, we cried, we kicked evil in the dick; it was great. And then I hit the point where they had nothing new to say; where every NPC had reached the end of their personal story and arc.

Without character hooks, without interplay, without an emotional payoff that you can attach a face to, your story (probably) just ain’t that interesting. It’s a string of events and situations that don’t matter to the people in them – and that means it doesn’t matter to the reader. So don’t keep the plot going if there isn’t any character-meaningful story going along with it; wrap it up then and there.

Good villains are hard to write

Inquisition‘s villain is kind of rubbish, but I can’t give BioWare too much stick for that. It’s easy to write a bad guy who rants and raves and puts into play a poorly-thought out plan that doesn’t really make any sense. I know, I’ve done it (currently rewriting it). Going beyond that is difficult; you have to give your villain a personality people can connect with but still want to see defeated, you have to let them appear multiple times and engage with characters to build up their mystique, and you have to make their nefarious plan hang together at the end and be more than ‘he turns up and punches EVERYONE’.

Alternatively, he should be Doctor Doom. Who is the opposite of so many of those things, but still AMAZEBALLS.

So is good romance

The first Dragon Age game treated romance as a vending machine where you constantly gave NPCs presents and said nice things until sex fell out and you got a dodgy underwear-on cutscene. DA2 made you wait for specific opportunities – I call them sex windows – to flirt with NPCs, but every NPC was totally into you so you could pick one and just mash the heart option until you were rewarded with a dodgy underwear-on cutscene. DAI continues with the sex window mechanic, but gives NPCs specific sexualities and preferences, so you can in fact waste the entire game trying to chat someone up until she reveals at the 60-hour mark that she’s not into girls and now it’s too late to sex someone else and DAMNIT I JUST LOST THE GAME no cutscene for me.

What I’m trying to say is that writing a believable, engaging romance is hard. It probably looks more like the DAI version than the other two. But it’s still hard. And no, not ‘hard’ in a dirty way. For god’s sake, grow up.

Dragon Age Origins was full of difficult moral choices, many of which boiled down to ‘do the right thing and suffer a penalty, or do something terrible and get a bonus’. It was simplistic and overdone, but by god it worked; that and the chance to sex up Morrigan/Alastair were the big drawcards of the game. Inquisition’s choices, on the other hand, mostly defaults to ‘choose one kind of benefit or a different kind of benefit’, with moral choices being either peripheral or non-existent. And I’m sure there is a kind of reader who would prefer that, who is not interested in messy stuff about feelings and ethics and consequences and more interested in effective tactics and strategies for taking down the Big Bad in the faster, smoothest and least difficult way.

Do not write books for these people. Trust me.

Never be afraid to go for a hit of real emotion

Video games tend to be a shallow and simplistic medium in many ways, and DAI is no different; running around the Hinterlands setting fire to bandits is not deep. But there’s a moment about 1/3 of the way in, at a point where everything has gone wrong and a group of people come together to find some kind of way to endure and continue… it gave me chills. Hell, it nearly made me cry. It was lightning in a bottle, nothing else in the game mattered like that and it won’t work when I play it again – but I will remember that moment for years, will remember it long after I forget the boss fight at the end oh shit I already forgot that bit. I shouldn’t have to tell you this, damnit.