Last week I talked about the map from my Exile Empire D&D game, confirming my nerd credentials and likely driving away anyone that saw my name in the GenreCon program and wanted to check out what the hell I do. Sorry, writing people – but I swear that this stuff is relevant. I swear. HONEST.

…and also I’m a giant nerd.

And this week I’m going to talk about another roleplaying game campaign, although this one hasn’t started yet – although that hasn’t stopped me from making an Obsidian Portal page for it, as discussed in my post about wiki writing last month. (Go back and read it if you like. It’s cool. I’ll wait.) Called Tales of New Jerusalem, it’s a World of Darkness game structured into small, self-contained arcs all set in the titular city, a place that’s been kicking around in my head for a while. New Jerusalem – a small, decaying city somewhere in the English-speaking world, and a place where all kinds of supernatural goings-on occur – is a place I want to define as a continuing setting, someplace with its own character and personality – just as I’ve tried to do with Crosswater and Port Virtue – and the campaign map is a big part of that.

This, then, is my map for the New Jerusalem game: 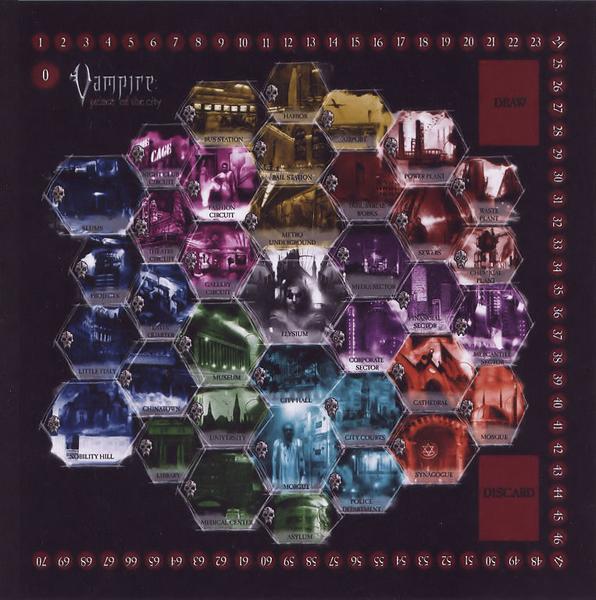 What the hell is that? That’s not a map!

That’s the board for Prince of the City, a Vampire: the Requiem board game. And sure it’s a map – look at all those locations! I’m not using the numbers around the edges, but all those moody, supernatural hexagons in the middle – hells yeah, that’s my city, along with a couple hundred photos of abandoned buildings and urban decay sitting in a subfolder.

Anything can be a map

What is a map anyway? Does it have to be physical or geographical? Does it have to be a two-dimensional image of a place? Does it have to show a territory? If you’re using a map as a writing aide or adjunct, then I don’t think so – it’s a way of navigating a narrative, before/during/after the writing process, and there are all kinds of ways of doing that. A game board is no better or worse than any other map, so long as I use it in ways that are actually effective – I can’t use this to work out a street route, but I can for defining and exploring the tonal connections between places or developing the character of locations.

If you’re trying to make a map for your work, be willing to go beyond the obvious. A wiki can work as a map, as can a directory full of video/audio files (with appropriate file names). You can stitch a map together from loose index cards with scenes and places on them, drawing connections and putting them in an order that makes sense to you. Hell, you can use the I-Ching or the Tarot as a thematic map, randomly or deliberately choosing images and ideas that click together in well-defined ways. I should know; I’ve done that for a couple of projects now, and it’s always a process that I find useful, albeit not one that might make much sense if spelled out for readers.

You don’t have to take the layout literally

Obvious this isn’t a 1-to-1 layout of the city – you can’t have a town where the south-east corner is all places of worship while all the people live in culturally divided blocks on the west side. And nor is the city centre a great grey space called Elysium where vampires hobnob and have tea parties without fear of retribution, although that would be pretty damn baller. Instead, this is more of a conceptual map, or even a tonal one – a way of naming and grouping kinds of places and locations to help with storytelling. It clumps place-types together as a reminder that a city will have these kinds of industrial locations, these kinds of business districts, and that exploring one might allow links to others.

Similarly, this map isn’t saying that the Cathedral District is just one big-arse church the size of a Melbourne suburb; it’s saying that the defining feature of that district is the Cathedral, whether physically (it’s really impressive), culturally (most people there are Catholic) or socially (the district is home to people who work and care about the operations of Christianity). When you use a conceptual shorthand, it’s a way of boiling things down to their essence – but you can always unboil (shut up, it’s a word now) things back to see the details that foam and set into the space. Lots of maps show the macro and let you drill down to the micro; some also encourage you to drill backwards from the small to the large. Which is pretty cool.

But you can if you want to

You know, then again… what if it was a 1-to-1 mapping? What kind of town do you have if the major synagogue is right next to a popular mosque? If the city morgue is just north of the local asylum? If the glamourous salons of the fashion circuit were just a few blocks from the piss-scented lights of the bus station?

Map can be story depictions or story generators, as we’ve discussed, and I for one get a lot of my story ideas from incongruity and the attempt to reconcile what seem to be conflicting concepts. A map like this is great for generating those kinds of ideas, for trying to make sense of the nonsensical and seeing what develops. Why is the financial sector next to the sewer district? Well, maybe stockbroking businesses moved into the area when prices were low and have now gentrified this cruddy, smelly part of town. The old plumbing unions are being pushed out by the almighty dollar, and families of sewer workers see their rents rising and jobs disappearing. Except that the old sewers push in under the financial district – and one guy with nothing to lose has found a map showing an underground route to the city’s biggest bank…

Sometimes there’s a power in taking things at face value – in saying ‘okay, let’s make it make sense’ and seeing what you can come up with. Just like a diphthong is a new sound caused by moving from one vowel sound to another (yeah, I’ve got a phonetics project on the go at my day job, you can tell), so a connection between two story elements can be its own unique story element – and it can be easier to make that connection when things are touching, even if only conceptually. Tales of New Jerusalem is an anthology game – rather than one big long storyline, like a novel, it’s a collection of short 3-4 session games with different characters but set in the same place and continuity. One storyline might take place just at the university, or in Chinatown – or might cover two or three locations, leaving the rest of the city for another time. Because of this, it’s not enough to just give the city its own character – each district and sublocation needs its own personality too, enough to be more than just a backdrop.

The tools for developing place-character in gaming aren’t the same as those in prose writing, but there’s overlap, and both types of creation can learn from the other. One of the best resources for developing modern urban locations in horror gaming is Damnation City, a Vampire: the Requiem book that is probably the single best product put out for the line. It’s all about realising the tone and feel of a city, from the macro to the microscale, from the past to the present, and – most important of all – communicating that tone to players as their characters engage with the setting and create story. It’s a hell of a read, it’s one of my creative bibles for the New Jerusalem campaign, and if you’re writing horror prose then you could do a lot worse than to think about some of the tools within in.

This is the second-last instalment of September’s month of maps, which is extending into October because I have many things to talk about and a poor grasp of calendarisation.  Come back next weekend for the last of it, where I look at a disgracefully moribund project and remind everyone that I’m bad at meeting my own commitments. It’ll be fun! We’ll have hot dogs and talk about failure!

Also this week, you can find my Melbourne Fringe Festival reviews at Crikey, as I’ve been seeing comedy shows for their Laugh Track blog.

And in two weeks time, I head north for GenreCon! I’m as excited as hell! I’m almost certainly going to blog about it!