So last Monday we adopted a dog.

This came as something of a surprise to all three of us. My wife and I have been talking about getting a dog, because the loss of our cat earlier this year had left us missing animal companionship, but the plan was possibly to get one in a couple of years. Okay, next year. Okay, during the holidays oh wait he’s here right now.

Anyway, his name is Ernie, he’s a 10-year-old former stray (because older animals need love too), he’s a Maltese/poodle cross (which is apparently called a Maltipoo but we’re calling a moodle because screw calling anything a Maltipoo) and we love him to death already. 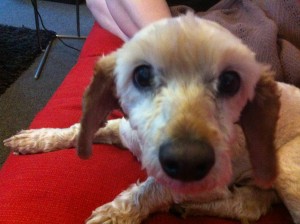 So naturally I’ve got to blog about this. But because this is still (nominally) a writing blog rather than lookatmyadorablepuppy.blogspot.com, I thought I’d blog about the five writing-related things that have occurred to me over the last seven days of morning walks and tummy scratching.

The choice to adopt Ernie was a sudden one. We were still umming and ahhing about it for when my wife went to the Lost Dogs’ Home to check out a candidate she’d seen online; she liked him, they said we had to take him there and then, and the next thing you know he’s sleeping in the bathroom. That might seem like a snap decision, but in truth all decisions are instant decisions; all the work around them is mostly justifying to ourselves what we’ve already chosen to do. We decided to adopt Ernie the moment we saw his silly little face on the LDH site; why pretend that we needed any more time to make up our minds?

I think writers tend to spend a lot of time deliberating on ideas and decisions – is this the best voice for this character, should the story take this particular turn, should I bother cleaning a glass or just drink this bourbon straight from the bottle – that maybe don’t need so much fiddle-faffing about. First ideas tend to be the best ideas; they’re the ones that immediately spring from your imagination and your storytelling instincts, the ones that speak to you loudest and clearest. (And if those instincts aren’t fully-formed yet, then acting on them and exploring the consequences is a good way of developing them.) Rather than go back and forth over whether the villain of your book should be a scheming land developer or a radioactive lizard creature, just pick the one that speaks to you and go with it. And if the fast decision is the wrong decision… well, that’s what first drafts are for.

Up all morning but not lucky

I think of myself as a morning person; I get up around 6.30am pretty much every day, weekends included, and spend a leisurely hour or so reading Twitter and drinking coffee before doing whatever I gotta do that day (usually go to work and make those dolla dolla bills, y’all). But now my routine also has to include getting up even earlier so that I can spend 20-30 minutes walking Ernie, and after a week of that I am a broken man. I’ll probably get the hang of it in a few more weeks (just as the mornings start to get shorter again, damnit), but right now it’s 8pm and it’s all I can do not to pitch face first into the keyboard and snore ’til dawn. After all, I gotta stay awake to walk him again tonight.

I bring this up because I know a number of writers who get up at 6am, 5am, even 4am to start writing, getting the full advantage of solitude and the first rush of wakeful brain energy to get the words going. I admire those guys and gals, and for a while I’ve been thinking about trying that approach, but a week with Ernie has convinced me that that’s never going to happen. My peak time for writing is around 12-5pm, and if I can’t manage that (because I’m at work) then 7-10pm is a decent substitute. And it’s probably best that I accept that, and accept the way my body and brain are wired, and work within that framework than try to force myself into a different schedule.

Your mileage may vary, and it’s worth making a few experiments to find your best rhythm. But once you get it, stick with it.

I’ve never owned a dog before, and rarely taken one for walks. Now that I’m doing so, it’s fascinating to watch Ernie explore the world around him, because it’s not the world that I’m interacting with. Ernie’s world is one outlined by scents and smells, imperceptible to me but absolutely solid to him. He’ll double-back on an invisible trail to find the prize at the end, baulk at crossing a odour-line that marks territory or abruptly change direction to bury his nose in a square of grass until I have to pick him up and carry him away.

As a horror writer, I like to include weird invisible things in stories, stuff that perhaps only one character can see, and the simplest fallback for that kind of thing is to make it subtle and tricky and mystifying. But when I look at Ernie, his behaviour is anything but subtle; for him the invisible world is as concrete as a maze of brick walls, and he reacts to it with an obvious physicality and focus. I think that would be an interesting take on ghosts and spirits and invisible hoojums, and the folks who interact with them, and I might use that to inform the horror/fantasy novel I want to start in two books’ time, Scar Tissue.

The thing about getting up at 6am (or 5.30am, damnit) and taking the dog for a walk is that I’m discovering a whole new world and community that I never really knew existed – the world of other locals taking their dogs for a walk at the same time. Ditto for evening walks; there are a bunch of people stalking the streets and parks of Northcote of a nighttime, leash and poop-bag in hand rather than watching TV. And whatever time of day, we have a new common ground; we’re part of a network of tired folks who say hello while their dogs sniff each others’ buttholes.

When you’re writing, you don’t need to make massive upheavals in a character’s life to introduce change and conflict and plots. All you really need to do is add something new – a dog, a meth habit, a Fabergé egg, a taste for dubstep, a brain tumour. Whatever the addition, there’s a club of people who have the same thing, and you’ve now opened up a story space for your character to meet and engage with that new community. That can lead to a heart-warming story of personal growth, a dramatic story of love and cheating, or a mystery story involving  discovering the fresh corpse of another dog-walker. You just need a little push, a little change; everything else can flow from that if you want it to.

I’ve been picking up a lot of poop lately.

And now I think I need to try harder to evoke smells and odours in my writing, because that stuff can really set a scene.

…I could go into this further, but as previously established I’m tired and I have to go walk the dog.