Hey folks. Last weekend – using ‘weekend’ as a synonym for ‘Monday night’ because shut up – I talked about writing stories about failure, or that drove towards failure. You know, the sorts of stories that most people don’t want to read.

What do people prefer? Stories about success, unsurprisingly; stories about protagonists who overcome conflicts and succeed at their goals. Sometimes those protagonists are regular people; sometimes they’re Superman or Commander Shepard (FEMSHEP 4 LIFE). You know, stories that are fun rather than being a massive downer; stories that have a satisfying climactic ending rather than a gear-shifting anti-climax. 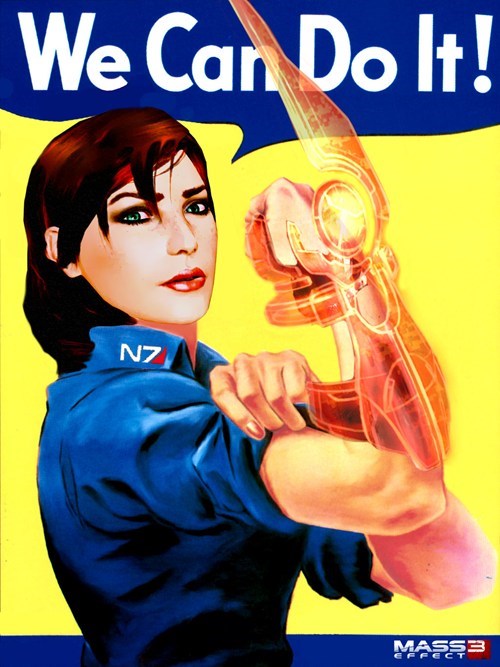 And yet, for all the fact that people (myself included) love these sorts of stories, they’re very easy to do badly. I’ve read too many stories and seen waaaaay too many movies where success seems pedestrian rather than exciting, where heroic competence is dull rather than engaging, and where the climax feels safe and predictable rather than exhilarating.

So once again Mister Tells-You-How-to-Write-Despite-Never-Finishing-Anything is here to give you some tips, this time on writing a strong story about a successful, engaging character. Trust me, I’ve read a lot of Batman comics, I’ve played a lot of D&D; I know how this shit works.

You have a main character and she’s awesome. She has two guns and she can pick any lock. And when she gets to the secret base to steal the gold-plated McGuffin, she walks in and out unmolested because Count Bad Guy trips over a staircase and knocks himself out rather than fighting her. Is that an exciting story?

The key to drama is conflict, and the key to an engaging, meaningful conflict is that victory has to be earned rather than given away. It’s important that the character succeeds through their own skill, ability and effort, not just through lucky breaks or through their opposition stuffing up. A hero who wins the day thanks to their rival’s incompetence or because she walked through the right door isn’t interesting, and their conflict (and victory) feels false. So when bringing your character out on stage, show off her skills – don’t hide her light under a bushel. Let her be aware of what she’s good at, let her use those abilities and let them be effective in overcoming obstacles and conflicts.

Failure comes from someone else’s competence

You want your character to win at the end, yes, but along the way it’s good for them to have a few setbacks and take a couple of knocks, if only so that they can bounce back from the defeat and learn from it. But if those setbacks are due to them not being skilled or strong enough to have a chance in conflicts (your hero has two guns but doesn’t know how to shoot them), or if she fails due to bad luck or random chance (her lockpicks get stolen by pigeons along with her lunch), then she doesn’t come across as a credible hero, she comes across as a schmuck.

The way to frame defeats, then, is to give your character competent opposition, antagonists or dangers that are simply greater than even her skills can overcome. She’s a crack shot with her pistols, but Count Bad Guy has bulletproof handwavium skin; she can read minds, but that doesn’t help when her yacht hits an iceberg. Situations like this position your antagonists and dangers as being meaningful and relevant, rather than just set dressing or minor speedbumps, because we never know if or how the hero will prevail. But prevail she will, because these conflicts can’t stop the narrative short; instead, the character can find new ways to get around the obstacle, either through improving skills (making armour-piercing handwavium bullets) or applying different abilities (picking the lock of the frigid prison at the heart of the iceberg).

So if you can’t use bad luck or external events to make your character win or lose, then what are they good for? Glad you asked. These externalities – sudden rainstorms, food poisoning, everyone in Chicago turning in a werewolf – open up new avenues for conflicts. A gunfight on the top of a burning skyscraper, with no way of getting off, is a lot more engaging than a gunfight in an empty street on a sunny day. Your hero can pick any lock with the right tools, but her picks were stolen by pigeons (remember?); now she had to improvise tools from bits of frozen scraps before the ice prison sinks. The context of the conflict changes, the parameters of description change, and everything gets more interesting.

External factors like this are also a good way of opening up new directions for the story, because they allow for different consequences and to explore the reactions of the main characters to those consequences. Your hero didn’t set that skyscraper on fire herself, and in fact got burned in the blaze, but now everyone blames her and she must avoid the police while seeking medical treatment. She escaped from the frozen prison before it sank, but now she’s stranded in the Arctic and the ice wolves are coming. None of these things are her fault, but they keep the dangers and conflicts flowing even after she’s succeeded to doing what she needed to do – she reacts to them, rather than them being reactions to her.

Flaws and weaknesses increase the awesome

It goes without saying that flawed characters are more interesting than perfect ones. (And in case it doesn’t, I’ll state it quickly – flawed characters are more interesting than perfect ones.) But flaws need to have an impact on the story to feel meaningful; your character being frightened of octopi doesn’t matter if the entire story takes place in the desert. A good way to make those flaws meaningful is for them to open up new conflicts as the character reacts against them – like an external problem, but internalised. Your hero hates Nazis, so she goes out of her way to bust up a ring of Illinois Nazi werewolves, and now she has to take them on at the same time as fighting Count Bad Guy. If she could have left well enough alone… the story would have been duller.

The other good way of making weaknesses work is to use them to raise the stakes in conflicts. Your hero has a bad temper, so when a contract negotiation goes bad she kicks over a table and calls the Pope a motherfucker. Now this negotiation is a lot more complex and difficult, and if she can’t mollify the Pope he’s gonna open up a can of white smoke on her arse – and won’t lend her the Vatican Guard to help her fight the Illinois Nazi werewolves. Which is going to really hurt when the ice wolves come for her in the Arctic… Flaws exist to get your character into trouble; trouble exists to make conflicts feel more important.

Victory has a price

Nothing in this world comes for free; victory needs not just hard work but sacrifice. For success to feel important, it kind of has to suck for the hero; she needs to give up something in the process. It might be love, happiness, her left arm, the chance to live a normal life or even her life, but whatever it is, it has to hurt; it has to be a price she would rather not pay. This is where too many blockbuster films slip up – the hero works for a victory (often by punching/shooting lots of people) but never sacrifices anything, never has to lose anything important to her to save what’s important for others. There’s no note of sadness (or at best a temporary one) in the relentless bugling of success.

And this, in turn, is the flip side of last week’s discussion. In a story of failure, the protagonist gives up the big goal for the small goal; they choose to fail at one in order to succeed at the other. It’s exactly the same in a story of success, but the priority remains as it was at the start of the story; the main goal is achieved, but the secondary, personal goal is forever lost. Batman can never be happy; Ripley never gets to build a life with Hicks and Newt; Commander Kirk can never just spend his days banging hot aliens. (Well, not unless the film is dumb.) Maybe it comes down to a choice, maybe it doesn’t; maybe the price is paid early, maybe right at the end. But winning has to be a kind of loss; that’s how you know it was worth it.

I really should workshop this gun-toting Nazi-werewolf-fighting cat-burglar concept more. There’s at least a novella in it.

Come back next week when I talk about editing! Or something else if I change my mind!