No, this is a THREE-STORY MONTH – and what better way to hit the trifecta than with a sequel to The Obituarist? 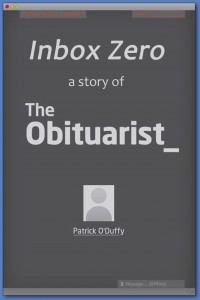 ‘Inbox Zero’ is a short story set a while after The Obituarist, in which social media undertaker Kendall Barber is working for a new client, a publisher of customised Bibles. When settling accounts for his recently deceased client, Kendall comes across a Deathswitch email – a message the dead man wanted sent to his family after he passed away. What’s in the email – and why is Kendall’s client so eager to see it?

‘Inbox Zero’ is available for download right now at Smashwords, and it’s completely free – which, unfortunately, means I can’t offer it through Amazon. But it’s available in Kindle-friendly MOBI format, as well as EPUB and PDF, and I’ll be offering a slightly nicer PDF through my Downloads page a bit later in the week (once I find the time to put one together). It should also propagate out to other stores, such as Barnes & Noble and the iBookstore, over the next few weeks.

For those readers who’ve been clamouring over the last few months for an Obituarist sequel, ‘Inbox Zero’ is not it. I mean, it is a sequel, but it’s not the sequel; Obituarist 2 (Electric Boogaloo) is on my to-do list and will probably come out in about six months. This story is more of a quick diversion, a stand-alone story that doesn’t require you to have read The Obituarist already (although it couldn’t hurt) and that will hopefully tide you over until the real deal is ready.

A key element of this story is Deathswitch, a real service that lets you set up an email to be sent after your death. The folks there were kind enough to read my first draft and check the accuracy of the piece, which was very kind of them. As part of my research I set up an account for myself, then failed to respond to my emails, and soon got my email to notify me that I was dead. That was… well, a little odd, but I do whatever is necessary for the verisimilitude of my work.

Because this story is free, I highly recommend sharing the absolute shit out of it. Email it to everyone you know! Put it on torrent sites! Read it aloud on public transport! If it can find some readers and drive them back to The Obituarist, I’ll be happy. Heck, I’ll be happy even if it doesn’t. I have lots to be happy about. Although if you want to make me extra happy, you could leave a comment to tell me you liked the story. And/or a review on Smashwords.

And with that, I’m done with short fiction for a bit. Time to get my head back into YA fantasy and Raven’s Blood.