So I had a really, really good plan for a blog post tonight, one where I had facts and figures and could talk with authority about practical matters.

But I left all my notes at work.

So this is not the best blog post in the world. This is just a tribute.

Or, to be more accurate, just me talking quickly about a few good things, much like I keep meaning to do with those Thursday night posts. Which are going to become Wednesday night posts, because people keep asking me to hang out and do stuff on Thursdays.

I saw My Chemical Romance this week. Good gig! Less theatrical than I had expected from the band that gave us Danger Days and Welcome to the Black Parade; no costumes, no pyro, no crazy lighting displays. Just guys playing rock and roll, which is cool. I like gigs like that. And most of the kids in the pit were actually dancing, rather than just standing there filming the show on their iPhones, which made it an improvement over, say, Muse last year.

My wife got a stack of BPRD trades for Christmas, so I’ve been catching up on those and on Hellboy. BPRD is a really intriguing series in the way it counterbalances high-stakes action-horror, like giant Cthulhuesque monsters rampaging across America, with more street-level material drawing from a variety of real-world sources and then partially gonzofied. It’s really clever stuff, and the art at this point in the series is by Guy Davis, so of course it looks amazing. (One of the high points of my game-writing career was having my words on the same page as Davis’s art. A-MAZE-ING.) 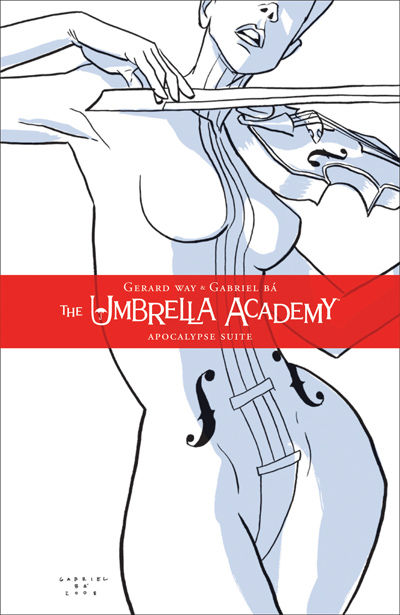 In celebration of the MCR gig, I also reread Gerard Way’s two Umbrella Academy collections, which are surreal and occasionally disturbing superhero comics that drench pop art in Grand Guignol and outright silliness. I hope he eventually does a third series, or alternatively makes good on his promise to write a Danger Days title.

And then there was the news of DC Comics doing a bunch of Watchmen prequels. But we’re only talking about good stuff here.

2012 is shaping up to be a big nerdy year for me, with my D&D game back on schedule as of today (it was cah-razy) and joining another campaign being run by the excellent Mister Kevin Powe. The news that yet another bloody edition of D&D is in the pipeline has made me appreciate the kinetic, cinematic fun of 4th Ed even more, and I’m looking forward to playing the hell out of it and not bothering with the new shinyness.

I also just finished Dragon Age II yesterday, which was a disappointment but not a crushing disappointment. From a weak start it eventually starting raising stakes and exploring themes, and the gameplay was generally fun, but still, riddled with problems. Much like my post on Arkham City, I think I could write an essay on DA2‘s plotting problems, specifically talking about the consequences of actions (or lack thereof) and the need to build a cohesive narrative rather than just a patchwork quilt of events. Maybe another time.

More importantly, I have the videogame monkey off my back again, and can devote more of my time and imagination to writing. Which I’ll do. Scout’s honour.

(Fun fact: I was kicked out of the Scouts.)

One thing I’m excited about right now is the news that Louise Cooper’s Shadow Through Time trilogy, published in the early 2000s, is coming out in ebook form. This was a really solid romantic fantasy series that deserved better exposure than it received, coming at a time when Australian fantasy was experiencing a high point in local publishing and sales but still not making headway into international markets. The ebook format will hopefully change that (although Australian ebooks still have to work hard to find UK/US readers, which is something worth talking about sometime in the future).

So anyway, if you’d like romantic fantasy that’s a cross between Alice in Wonderland and Excalibur, you should definitely check these out.

Right now I’m reading Alan Bissett’s Death of a Ladies Man, and struggling with it a bit. The writing style is fascinating – fragmented, poetic and playful – but the pace is slow and I’m finding it more difficult than I expected to sympathise with the main character. But damn, the style is really intriguing.

After that, my to-read list includes Jeffrey Eugenides’ The Marriage Plot, Lev Grossman’s The Magician King, Duane Swierczynski’s The Blonde and Guy Adams’ The World House on my table. (I don’t know anything about that last one, but I wanted to check out the sort of thing Angry Robot Books is publishing.) If you want to know when I get around to them and what I think of ’em when I finish, you could follow me on Goodreads. Would that be interesting? I’m still not sure what Goodreads is really for, but hey, if you’re on there, you could do worse than follow me.

He’s doing better, thanks for asking!

Okay, that’s enough chitchat for one night. Back to more focused topics next time.