Go to a writing conference or group and you’ll hear folks talking about the ‘through line’, the theme or concept that drives a novel. 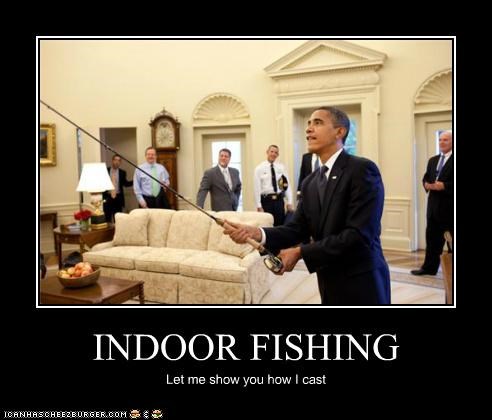 But there is a line you can draw from your strong beginning to your kick-arse ending, and if you have a line you can use it to pull readers from one end to the other, and at that point the fishing metaphor works as well as anything else I normally serve up on this blog.

So listen: I’m going to share with you a secret technique, so secret that only thousands of other writers use it to create effective fiction. It is a FOOLPROOF* (*note: not in fact foolproof) method of engaging a reader and GUARANTEES* (guarantee not valid in any known human society) that your book will be described as ‘pulse-pounding’, ‘a real page-turner’ and ‘unputdownable’, and that last one isn’t even a proper word!

I do this because I love you. All of you. Even the spambots.

And yes, I call this technique The Fishing Line, because that sounds snappy, and it consists of three angling-themed parts, thus making my metaphor actually accurate for perhaps the first time.

The first thing to do is open your story with a hook. What does that mean? It’s something that grabs the reader’s attention and then keeps it – and that second part is important, because it’s too easy to open strong but then lose your iron grip on the wandering eye. Don’t start with the weather, or a page of description, or a scene where not very much happens for ages – open strong and in the middle of things, for whatever value of ‘middle’ makes sense. The mission statement is part of the hook, but so is a sense of urgency, immediacy or compelling uncertainty – an opening where the reader quickly understands what the book is going to be about but wants to see how you’ll fulfil those requirements.

Can I give examples? Sure. For a self-aggrandizing one, Raven’s Blood opens with both a mission statement – this is a fantasy novel, our heroine is rebellious, there’s magic, something strange is going on – and the urgent hook of a man falling to his death, delivering a cryptic statement and then exploding in flames. That’s as strong a hook as I can manage. Or for a less egotistical example, how about the first issue of Grant Morrison’s awesome All-Star Superman? It opens as Superman saves a spaceship and fights a monster within the Sun’s chromosphere, then finds that his power levels have increased immeasurably from exposure to so much solar radiation – to the point where the overexposure will inevitably kill him. It’s a perfect issue – smash opening, high concept, mission statement, lots of character moments and Frank Quitely artwork.

Once the reader is on the hook, the next step is to drag them from the first segment of the story to the next. What’s a ‘segment’? A chapter, an issue, the bit of the episode between commercials – whatever the natural break points of your story are. (If you don’t have those break points – say if you’ve written your book as one long chapter – then for god’s sake go back and put them in.) The thing about a break point is that the reader is naturally inclined to stop reading at that point, so you have to give them a reason not to – to instead turn the page right freaking now. A cliffhanger is an obvious drag of the line, but there are subtler, more controllable forms; the key thing is to end each chapter (or whatever) with a question (although not literally). Who shot the hero? Where are they taking her? How will she tell her father that she’s gay? Is that bomb going to go off in the middle of dinner? All of these mean the same thing: what happens next? You have to make the reader ask that question, and you have to make them want to know the answer.

What’s the drag at the end of issue one of All-Star Superman? Clark tells Lois his secret identity. What’s the drag in the first chapter of The Obituarist? Kendall gets punched in the stomach by a mysterious neckbeard. In Raven’s Blood? Kember is being literally dragged off to see the Mayor. What happens next?

What happens next is that you have to answer the question in the next segment of the story – you launched the reader over the break point and now you have to bring them in for a landing. Make sure to resolve whatever question/situation you used to end chapter 1 within chapter 2 – don’t string it along for multiple chapters. You don’t have to do it right away – it can be in the middle of the chapter, or even very close to the end – and you don’t have to wrap it up 100% cleanly, but the payoff has to come before the next break point. That way you’ve piqued the reader’s curiosity, made them take the risk of continuing with the story, then rewarded them for that risk before giving them a chance to question that decision.

That still leaves room for mysteries, big stories and complex plots. We don’t find out who the neckbeard was in chapter 2 of The Obituarist, but we see that he had a reason for attacking the hero. We meet Mayor Roland Arrowsmith in chapter 2 of Raven’s Blood, but that doesn’t tell us why a man exploded. Lois goes to the Fortress of Solitude with Superman, but isn’t really sure he’s telling the truth, and Superman is still dying. But our small knot of tension has pleasantly undone itself, leaving us to resettle into the story and continue on our way.

Until we get to the next gap. Now do it again.

That’s the unspoken fourth part to the three-part technique – you keep doing parts two and three over and over again. At the end of every chapter, drag the reader to the next one, land them into a new status quo, give them a second or ten of breathing room and then shoot them into space yet again. It’s a roller coaster that bounces readers up and down without ever making them puke (unless that’s your thing) and gets them to the very end vibrating like a plucked string, ready to burn all that energy off with the final resolution of your book.

I told you, it’s a perfect technique.

Is this a perfect technique? Of course not. It’s something that’s well suited to plot-driven/genre stories but not necessarily to thematic, character-driven or literary ones. Done badly it’s a string of spurious cliffhangers with meaningless payoffs, creating not tension but eyerolling. And even if done well, it’s sort of artificial – it’s the kind of thing a reader notices, no matter how many variations on the drag you can come up with.

But hey, all writing is artificial, all of it is a crafted thing that a writer made; there’s nothing wrong with embracing that. Noticing the drag-and-land doesn’t make it bad for a reader, any more so than noticing that the writer uses a lot of simile-based descriptions or run-on sentences. I used this all the way through The Obituarist, for example, and had a number of readers complement me on the way I did it; they enjoyed being pulled through the story, even if they could see my hand on the line.

That’s the best kind of fishing. When the trout throws itself on the hook and then voluntarily climbs up the line to meet you.

…god, it would be weird if that happened. I should put that in a story.

Thanks for sticking around for tonight’s thoughts on writing and for this little series on beginnings, middles and endings. Though not in that order. Let me know what you think! Argue with me! Agree with me! Analyse favourite books to see if they fit this model!

And come back next week, by which time I will hopefully have thought of something else to write about.