So the big news this week… well, okay, there were lots of big news items this week, good and bad, and the following doesn’t really qualify. I’ll start again.

So the news this week that’s only of interest to a limited number of people (God bless you one and all) is the announcement of new Kindle models from Amazon, including bigger, better, 142% more awesome versions of the Kindle Fire that still can’t be bought or used in Australia, and the Kindle Paperwhite that features integrated front-lightning for better visibility and a portmanteau name that sounds like some kind of 4E Dungeons & Dragons monster.

Plus, if that’s not exciting enough, there are new Kobo tablets coming out (which presumably can be used in Australia), new mini-iPads that have e-reader apps and the iBookstore, and presumably a system where an adorable kitten follows you around and projects a book from its luminescent eyes onto the nearest wall for your reading pleasure is just weeks from a beta release.

The upshot is this – more ereaders, more ereader-readers, more ebooks, something something, I get all the moneys and Hugos. Well, okay, probably not that last bit. But for all us writers and readers that embrace the E, our numbers are growing and will continue to grow as hardware gets better and cheaper. Yay!

So what does that mean in terms of the way we read books, the way we approach reading books? Do ebook readers have different habits, desires and needs than regular book readers? Does the Kindle change our very nature as human beings?

Well, maybe not. But speaking as someone who’s owned a Kindle for about 6 months, it’s definitely affected the way I approach finding and reading books, largely in three ways:

Impulse buyer is me

It used to be that I bought maybe 4-5 books a year, if that. For a long time I’ve only purchased books that I’ve known (or been very sure) that I would like, and that I would either read more than once or want to lend to friends. For everything else, I would hit up one of the three library networks where I’m a member and borrow what I wanted.

These days? If it’s priced anywhere up to about $3, I’ll grab nearly any damn ebook that hits my eye, even if I have no idea what it’s about. If an author spruiks a sale or special or giveaway on Twitter then there’s a good chance I’ll just grab it on the chance it’s good – and if it’s a freebie, I won’t even care about that. Sure, I end up leaving many of those books fallow in the Kindle’s memory for weeks or months until I remember they’re there, and I delete some of them within four pages ‘cos they’re terrible, but the important thing is that they got my money.

If an ebook is somewhere between 3 and 6 dollars, I’m not quite as impulsive; I’ll hem and haw and think about it and then I’ll buy it anyway because fuck it, it’s five bucks, and you can’t even get drunk in this country for five bucks. (You can in Fiji, if you’re curious.) It’s only when we start heading towards the ten dollar mark that the brakes kick in and I start thinking ‘well, maybe this is a library book after all’. And then if it’s from an author I really like and want to support there’s a pretty good chance I’ll get it. But probably not right away.

More judgey than ever

You might think that getting so many books so cheaply, my standards would relax to accommodate different levels of ability, formatting and editing, especially for those plucky independent authors much like myself.

And you would be wrong, because THE IMPERFECT MUST BURN.

If anything, the recurring issues of formatting and layout that pop up in many ebooks – random italics, too-small fonts, unclear paragraph separation – annoy me more than ever, because I know that they’re fixable, and obvious, and it means the publisher hasn’t bothered to go through the finished file to check the details and make corrections. It says to me that they don’t respect the e-market, and in turn I find it hard to respect them back. So flaws that I might ignore in a printed book – because printer errors happen and they’re not the publisher’s fault – rankle me much more in an ebook that can be instantly repaired if someone gave a fuck.

(If you’re thinking ‘well fuck, man, your ebooks aren’t perfect either’, you’re right, and I need to do more to improve them. When I do I’ll let y’all know.)

And, of course, I give up on a book if it’s badly written. But that goes without saying, surely.

I’ve always been one of those people who would have 3 or 4 or 8 books on the go all at once, reading one for a bit and then switching to another. The Kindle amplifies that tendency one billionfold, because at least in the old days I’d normally only have one book (okay, maybe two) with me at a time. Now I have 30-plus with me all the time, and as soon as I start reading one I begin thinking ‘maybe I should read something else’ and I can and I do and oh god I have a problem.

So yeah, I find it really hard to stay on track to read one book at a time, even when I really enjoy the book in question. I’m not sure this is a bad thing, because the writer still gets paid and I (eventually) still read the book. But on the other hand, skipping between books willy-nilly like a meth-addled toddler in the kindergarten library makes it hard to maintain a constant grip on what I’m reading, which makes it harder to consider and review it at the end. And as we know, I think reviews are a Good Thing.

Well, working from the entirely warranted assumption that every ebook reader is EXACTLY LIKE ME, it seems to suggest that they’re folks who snap up books on impulse but don’t get around to reading them until later, that they read many books at a time and will jump from one to another at the drop of a hat, that they are quick to anger and slow to forgive (or maybe that’s wizards, I forget) and that they like books that are less than five or six bucks.

So should writers work towards that market? Should we write ebooks that are inexpensive, that compartmentalise easily, that can stand being picked up and put down again, that have OMG KEEP READING hooks every 2-3 pages?

Well, um, that’s kind of what I am writing or trying to write, more or less by coincidence.

And I think we should accept the horrible fact that even after someone buys your book they may not finish reading it for months or even years – so you’re possibly not going to get reviews and word-of-mouth sales quickly. And all you can do is shrug and accept it and keep going. Because with luck, they’re tell you you’re great eventually. Before the stars grow cold.

In other news, I’ve been feeling the occasional urge to write about roleplaying stuff, but I don’t feel that this blog is the appropriate place for it.

So I’ve set up a Tumblr called Save vs Facemelt, which I’m going to use to post occasional thoughts, reviews and hilarious bon mots about gaming, as well as meeting the quota of animated GIF traffic that you have to agree to under Tumblr’s terms and conditions.

I’ve kicked it off with some entries about Evil Hat’s upcoming Atomic Robo RPG, which we playtested last night (which is why this Sunday night blog post is coming out on Monday night). Go check it out if you’re interested and simply cannot get enough of me. 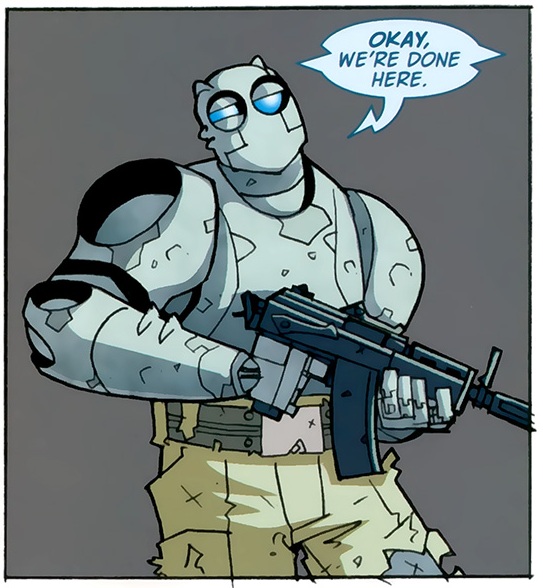