Because today I’m pleased beyond all measure to announce that my new e-novella, The Obituarist, is not only finished but published and available to purchase! 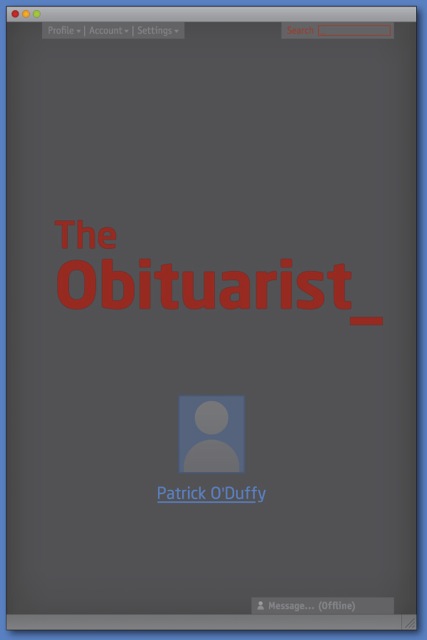 Kendall Barber calls himself an obituarist – a social media undertaker who settles accounts for the dead. If you need your loved one’s Facebook account closed down or one last tweet to be made, he’ll take care of it, while also making sure that identity thieves can’t access forgotten personal data. It’s his way of making amends for his past, a path that has seen him return to the seedy city of Port Virtue after years in exile.

But now his past is reaching out to catch up with him, just as he gets in over his head with a beautiful new client whose dead brother may have been murdered – if he’s even dead at all. If Kendall doesn’t play his cards right, he could wind up just as deceased as the usual subjects of his work.

On the other hand, Kendall may know more about what cards to play than anyone else realises…

It’s been six months since I announced the concept and started work on this book, two months since I rolled up my sleeves and started it in earnest. It’s been drafted and redrafted, edited and altered, changed and changed back again and now it’s as ready as it’ll ever be.

And I have to say that I had an absolute ball writing this book. Once I really got into it it was a hoot to sit down every night and lay down another chapter of weird crime antics, chase scenes, thoughts about death and identity and occasional jokes. That joy is a bit unusual for me – too often I find writing a chore – and I really hope this isn’t the last time I feel it. Or the last time I write about these characters.

I’d like to thank my wife Nichole for her thoughts and support, my Alpha Readers (Cam Rogers, Josh Kinal and Lyndal McIlwaine) for their feedback and suggestions, Fiona Regan for editing the manuscript and Carla McKee for her great cover. And I’d like to thank you guys, my readers, for responding positively to the idea and telling me you wanted to see more. Here it is – hope you like it.

The Obituarist can be purchased as a $2.99 ebook from the following sites:

All sites should have a sample of the novella that you can read for free.

As part of the launch, I’ve also made some changes to this site, specifically breaking out my ebooks into their own separate pages – so if you want to tell your friends about The Obituarist, link to this page right here. (I’ve also made new pages for Hotel Flamingo and Godheads if you want to spread the love.)

And speaking of telling your friends…

Folks, if you want to help me get the word out about The Obituarist, that would be fantastic. Amazing. Vitally necessary, in fact. I’m going to do everything I can to promote the book, but I need all the help I can get and you can provide some with very little effort. Here’s what you can do:

Above all else, tell me what you think of it. I want to hear if you liked it and what you liked about it, and whether you’d be interested in reading a sequel. Because I have ideas for more stories about Kendall and Port Virtue, but if no-one wants to read them then I’ll put them aside and work on something else. And I also want to hear from you if you didn’t like The Obituarist, because I’d like to know why and I’d like the next book to be better.

I always want the next book to be better. That’s how I know I’m not dead yet.

Alright, that’s enough out of me. Time to get off the stage and let the book do the talking for a while.