I’ve got comics on my mind this week. Which, okay, is pretty normal, but I have specific reasons for it this time.

We saw Iron Man 3 on Sunday, and I thought it was terrific. It’s been ages since we’ve seen a new Shane Black film – not since the excellent Kiss Kiss Bang Bang  – and it’s a joy to see him working as writer and director again. Black brings a real snap and sizzle to the script, filled with strong dialogue, tight pacing and genuinely engaging moments of humour, unlike the overstuffed and slapsticky Iron Man 2. Downey is great (naturally), Ben Kingsley steals the show and I would watch three movies that were just about Don Cheadle’s Jim Rhodes running around and shooting dudes, because Don Cheadle fucking rocks.

What’s really interesting about IM3, though (no spoilers) is the tonal shift it brings to the Marvel films. This is much more a thriller than a superhero movie, and many of the genre elements have been minimised or taken out entirely. Yes, Tony Stark flies around in Iron Man armour, but not as much as in the previous films; instead the focus is on the man outside the armour, the ingenuity he brings to solving problems and the toll that his actions take on him. It’s really clever stuff, but it’s also got plenty of great action sequences, included the extended showdown at the end. All in all it’s great work, and makes me really look forward to this wave of post-Avengers movies. 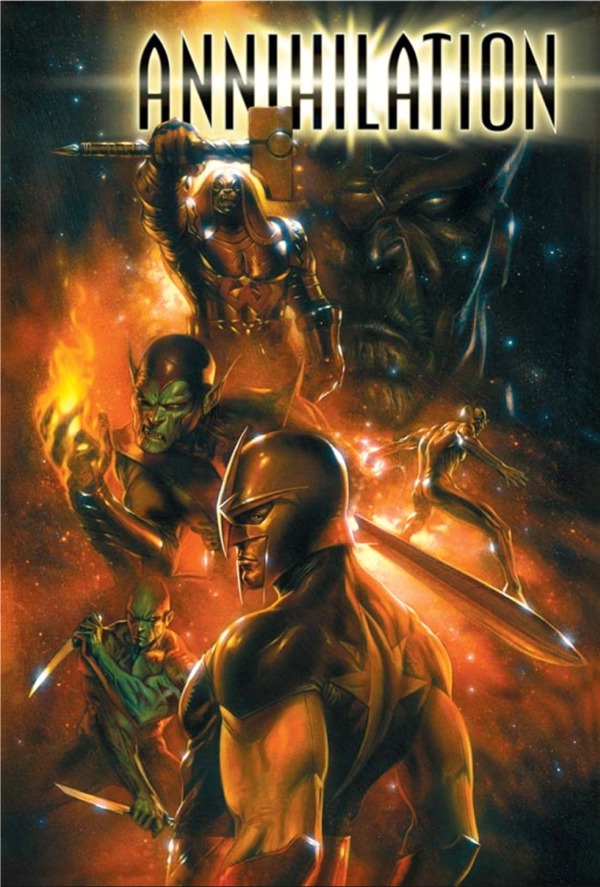 Unfortunately not all the Marvel news is good. I’ve really liked the Marvel Heroic RPG that came out last year, which I talked about a while ago here (and on my gaming Tumblr Save vs Facemelt); it married an engagingly interactive system with narrative concepts and placed them within a context of (mostly) playing established characters in big, complex event stories. It took a lot of risks, and it had a very good reception, winning acclaim and sales.

But not enough sales for Marvel management, apparently, who pulled the license last week, bringing the line to a sudden halt. The cancellation was so thorough that they even removed the right to continue selling PDFs of the current titles, which have ceased to be purchasable as of yesterday. No-one’s saying why the license was pulled, but it’s likely that Marvel just didn’t feel the income from the game was worth the bother. It’s a saddening move, especially as it (presumably) cuts the freelance writers off from being paid for their now-unpublishable work.

I have all the PDFs, and I’m hoping to run the Annihilation Event for my group later this year, but I’m sorry for everyone that will never get a chance now to play this excellent game.

And speaking of saddening moves in comics, the website Comics Alliance also shut down suddenly this week, as parent company AOL terminated it (along with a number of other media sites). In an industry where most sites just reprint press releases or fantasize about casting choices, Comics Alliance was a smart, engaging site that mixed news with humour and genuinely insightful commentary, especially on the representation of woman and minorities in superhero comics.

Plus they had a guy writing for them who really liked Batman. Which goes a long way with me.

There are a lot of very talented, very passionate writers now unemployed as a result of the CA shutdown, which is the biggest shame. I’m still tracking them separately, listening to (and donating to) the War Rocket Ajax podcast, following people on Tumblr and Twitter and generally giving them my attention. You should consider that too, if you’re into any kind of comics. Here’s hoping they soon find new projects to work on.

I’d like to hope that some other site will step up to fill the commentary gap left by CA, but I’m not holding my breath.

Yes, this Saturday is Free Comic Book Day, the day when comic stores around the world host events and give away comics from publishers big and small. The comics themselves are usually just teasers, samples and promo items – nice to check out but hardly essential – but what the day is really about is connecting with your local store, with fellow fans and nerds, with writers and artists and just generally having a good time. And, it should be emphasised, bringing young kids out to show the joy of comics and dressing up as Wonder Girl.

My not-quite-local-but-close-enough store is the incomparable All Star Comics in Lonsdale Street, which is a great shop run by great guys. Last year the queue snaked through the store four times, down the elevator shaft and out into the street, so this year they’re starting in the street, with an Artist’s Alley setup in Hardware Lane and manned by forty local comics artists. Man, I hope it doesn’t rain too much.

So anyway, that’s going to be great fun. If you’re in Melbourne, go check it out; if not, swing past your own store and see what festivities they have on. And then buy some comics, because the stores still have to pay for shipping on the comics they’re giving away.

And with that, it’s time to get my shoes on and go see They Might Be Giants.