…I mean, here I am, back just as promised!

So, did you miss me?

It’s been a hectic emotional rollercoaster, these last two months, full of doing stuff and learning things and not blogging. But my batteries have recharged, my notepad is full of ideas for blog posts (one of which just says ‘Doom Cock’, but I’m sure it’ll make sense eventually) and I have news and opinions to share once more. I’m glad that y’all hung around during the downtime.

So, let’s have a quick essay on what I did on my winter holidays.

I wrote stuff! Which is good, as that was the whole point of taking the break. I worked on Raven’s Blood, which is still behind where I would like it to be, but I’m very happy with the material I’m writing – so if I take more time but create a more polished draft, that’s probably a win. I’d still like to have it finished or close to finished by the time GenreCon comes around in October, though. I also did other writerly things, such as a freelance editing project and creating some wikis for various time-wasting nonsense activities.

I appeared at PAX Australia! I thought our panel on writing RPGs would get about 10 people, but it was more like 200 and another 50-odd standing outside. Crazy! I think it went well, and the feedback was very positive, so that was great. Overall I was pretty impressed with PAX – well, at least as far as the space and support they gave for tabletop gaming. Most of the videogame stuff left me cold, and I agree with Ben McKenzie that a lot more needs to be done to improve the stance PAX and the Penny Arcade founders take on problematic elements in gaming. PAX was also where I announced my return to the world of RPG writing, as I’ll be working on a product for a setting dear to my heart over the next few months or so. More details to come soon!

I also appeared at the helm of @WritersRotation – a curated Twitter account where a different writer tweets each week. That was fun, and hopefully some of the account’s followers will come by the blog and check out what I’m like on an ongoing basis. (Spoilers: drunk and full of excuses, mostly.)

I read some cool books! Specifically, I read Nick Harkaway’s Angelmaker, which is just a wonderful absurd romp, a riot of London crooks, aging spies, robot bees, pulp adventure and the uncertainty principle. I also read Margo Lanagan’s Sea Hearts, which is just about the exact opposite – an emotionally wrenching story about spurned and idolised women, long grudges and longer sadness, and one of the most moving and gruelling stories I’ve read in a long time. And YA at that – kids these days start the hard stuff young. And I started Chuck Wendig’s The Blue Blazes, read a bunch of comics, saw some adequate films (and one goddamn awful one), watched cartoons… you know, the usual stuff. 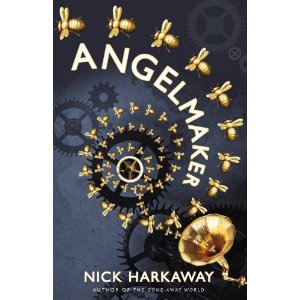 I quit my day job! Not to write full-time, no – one day, yes, but not today. Instead I’m moving on after seven years – seven years! – in educational publishing to a new and exciting role in… well, in educational publishing, but of a different type and for a different market. It’s a big move, and in many ways a difficult one; you don’t work in one place for so long without putting down roots. Still, I’m really pumped for the new job, which starts in two weeks. Here’s hoping that a) I enjoy it, b) they decide to keep me and c) it leaves me with the time and energy for writing.

I lived my life! I ran some games, I saw some shows, I drank some drinks. You know, quotidian stuff like that. And I learned that our cat’s health is fading. That wasn’t such good news, and it’s been hard for all of us here to accept that and make decisions about what to do about it. He’s still with us – he’s sitting on my lap right now – but he won’t be at some point. Which is also part of living life, I guess. So it goes.

And on that note, this story is done for the evening. It’s good to be back on the word wagon. Thanks for sticking with the ride.