Folks, it’s time for a bit of a change. Spring is here (along with its cursed handmaiden daylight savings), the sky in Melbourne is a perpetual battle between gloom and glare, comics companies are releasing exciting new titles and I’m starting to think that my blog sucks.

Well, okay, that’s maybe overstating things (and trolling for compliments). Better to say that I’m not super happy with my posts over the last few months, particularly the weekend ones. Too many of them are rambly, waffly things about the theory of narrative, or the subtext of reading, or the veal parmigiana of Kindle or some other thing that only makes sense to me – and maybe not even than. I look back at some recent posts and think ‘I have no idea what I was trying to get at there.’

This is what crack cocaine does to you, friends. Take it as an object lesson.

Anyhoo, I think that this blog has lost its direction – or, perhaps more accurately, that it never really had one in the first place, other than as a place for me to talk about myself and how awesome I am. And I still want to do that – believe me, I never get tired of talking about myself – but I want to be clearer on how I go about that and to write posts that are more engaging/less boring for you, my faithful audience.

So in the spirit of the New 52 (but less shithouse) and Marvel NOW! (but less exclamationy), I’m doing a bit of a reboot of this here blog. Or at the very least a change in creative approach and supporting cast.

Things I want to focus on: 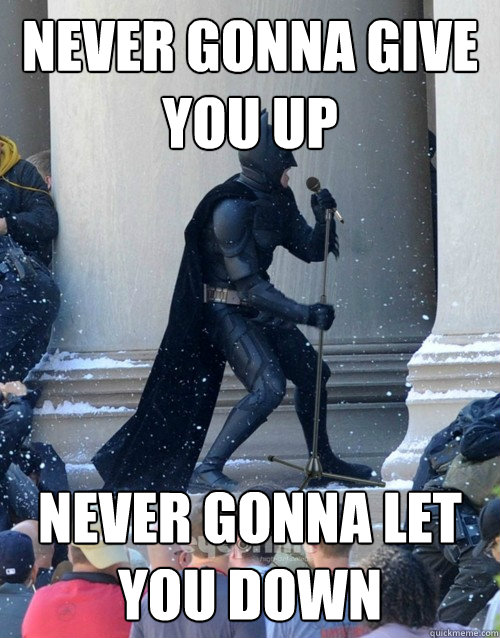 Things I don’t want to focus on… eh, I’m not gonna bother calling them out. Boring stuff. Meaningless gibberish. Lemmings. All that sorta thing.

In the end, I want this blog to be useful, interesting and entertaining, both for long-time readers (both of you) and anyone else that stumbles across it and might find value in it. And when an idea for a post doesn’t meet those criteria, or is a jumble of ideas that doesn’t have a solid core, I’m gonna put to one side while I work out something else to say.

The new era starts this Sunday! Smell the excitement!

2 replies on “A soft reboot (with a chewy centre)”

I await, your grammar posts, with interest.

(Also the rest but I reckon the grammar ones are particularly useful for me. Perhaps a “what would Batman write” series?)

No one ever taught me HOW TO USE A SEMICOLON (well done Australian education) and I’ve mostly had to guess/listen to grammar prompts from Word.

Also Batman. Because he pretty much runs my boyfriend’s life now and in turn runs mine. I used to own nothing Batman related, and now he is on my shoes.