I’ve been neglecting proper grown-up reading lately in favour of superhero comic collections, largely because the local library system keeps buying more and more of the damned things. (Back onto novels next week, though. Probably.)

Anyhoo, tonight I want to talk about one particular run of comics that’s well worth a look if you like Really Big Ideas – because it has a lot of them, and pretty neat ones at that. Normally that’s a segue into something by Grant Morrison, but this time I’m speaking of Jonathan Hickman’s run on Fantastic Four. 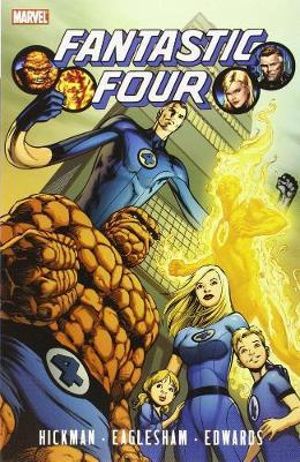 Now, I’m not a Fantastic Four fan; I’ve always found them the least interesting supergroup in comics and the ‘super-family’ concept has never clicked for me. (Possibly because I struggle with the concept of ‘family’ at the best of times.) Also, Mister Fantastic is boring and a dick. But at the same time, it’s the series where the Stan-and-Jack magic first took shape and revolutionised the whole medium and genre, and the place where Kirby started throwing out that unending series of incredible, impossible ideas – so there’s history there, and precedent, and the best takes on the title are when a writer puts their own spin and direction on that unfettered inventiveness.

And that’s just what Hickman does, putting together a massive, multi-volume storyline that explodes with mad inspiration. I don’t want to spoil anything, so let me just rattle off a few elements – an interdimensional council of Reed Richardses, time travel, a Negative Zone cult, giant mad space gods, the Kree, the Inhumans, even more Inhumans, Galactus, time dilation, cities full of alien life, Nu-Earth on the far side of the galaxy, Reed’s time-travelling father Nathaniel, interdimensional battles, super-intelligent children, even more super-intelligent children, alliances with the Four’s worst enemies against a greater threat and Doctor Doom being a stone motherfucker, all combining and building into one uber-conflict. Along with this come themes of sacrifice, loss, catastrophe and destiny, plus Hickman’s exceptional gift for character development, dialogue and conflict (plus occasional, very clever comedy). 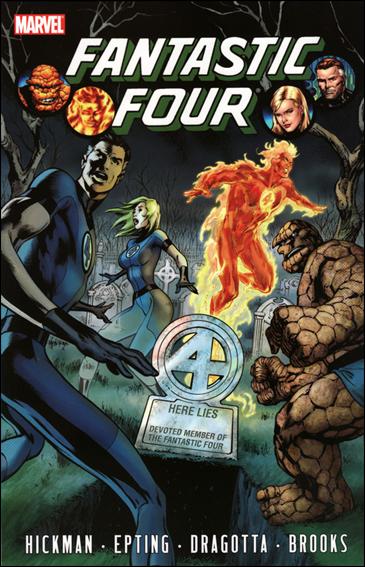 Once the series hits the death of Johnny Storm – that got reported in the mainstream media, so I don’t think I’m spoiling anything – it changes both direction and title, becoming The Future Foundation, or FF, counterbalancing superheroics with teaching a group of super-genius kids (and a giant robot dragon-man). This is also the point where they get new costumes and Spider-Man joins the team, because both those things sell comics. And they’re still bloody good comics.

(Also, Spider-Man is a more interesting character than the Human Torch. That’s right, I went there.)

After a year or so of FF issues (two collections), the old title and numbering comes back but FF remains, splitting the focus into two different comics as things build to a payoff. And a pretty awesome payoff it is. Hickman is still writing both series, but the last arc of each is denouement, aftermath and wind-down; they’ve yet to be collected into trades, but you don’t need them right now; you can knock over all eight trades currently available – like I did in a rush this week – and be very satisfied with the ending you get. 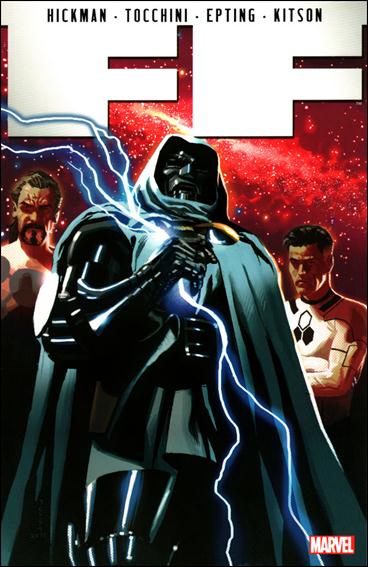 Which is not to say it’s perfect. The series stumbles badly in the second Fantastic Four collection, which introduces the four cities/groups that become hubs of the coming uber-conflict. These four issues are both heavy on exposition and light on conflict/action; they all involve some/all of the Four going to one of the cities and then standing around doing nothing while things get foreshadowed for later. The foreshadowing is necessary,  true, but it could have been done with a lot more energy and a lot less blatancy. Things pick up after that, and there’s lots of payoff from that slowdown, but pacing problems recur for the rest of the run.

That passivity also comes back at times, and I think that’s an ongoing issue for Hickman; in many of his books, protagonists seem to be overwhelmed mentally or emotionally by events, and take a backseat or spectator role while things happen and/or other characters manipulate things. Throughout the series, control over events falls or is taken from the hands of the Four and is taken up by others, especially Valeria or Nathaniel Richards. They’re interesting characters, yes, and I can see the kind of story Hickman is aiming for – one about destiny and immensity, and the payoff of good and bad decisions against that context – but it’s not always satisfying.

Oh, and the artwork is pretty variable and inconsistent, but it’s never so bad as to be unacceptable and we’re here to talk about writing. 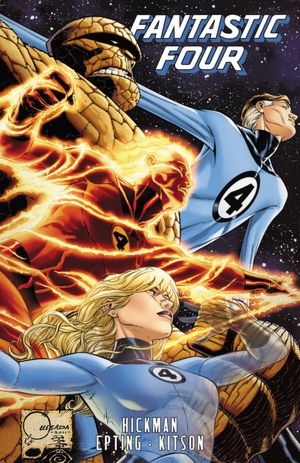 But in the end these problems don’t detract from the strengths of the series – the imagination and impossibility that is the hallmark of pure comics, married to sci-fi visions and a willingness to put characters through an emotional wringer to get a better story. And it is a pretty goddamn amazeballs story.

So get out there and read these comics. They’re neat.

And now, back to proper novels. Well, once I read Hickman’s new series The Manhattan Projects. Oh, and I grabbed Brian K. Vaughan’s Saga; really looking forward to that. And there’s a new volume of Scalped at the library ah fuck it I ain’t never reading stories without pictures no more.