(Alternative linkbait title: Try this one weird trick for finding repetition in your writing!)

So I’ve had a long and kinda irritating day, and all I really want to do is drink Scotch and grumble, but I don’t because I’ve got a work ethic and I owe you folks a blog post.

And I don’t want to drink because I have a platelet donation tomorrow.

…okay, fine, I don’t because I’m out of Scotch.

So as a quick, (hopefully) useful post tonight, I want to talk about a tool I like to use when writing, and especially when editing, to examine which words I’m using the most in the work. It’s especially handy when writing a large piece, such as this goddamn friggin’ novel that refuses to end.

You’ve probably heard of it – it’s the website Wordle, which generates word clouds from copypasted text. If you’ve not visited it yourself, you’ll surely have seen its outputs; there was a real fad in the late 2000s for using it to generate English textbook covers or irritating Facebook image posts.

But anyway, Wordle generates word art where the sizes of the words show their relative frequency in the text, something that can make things sink in much more viscerally than a plain word count. And in the process, it lets you see which notes you’re hitting the most often.

Here’s the entirety of Raven’s Blood (so far) in all its glory: 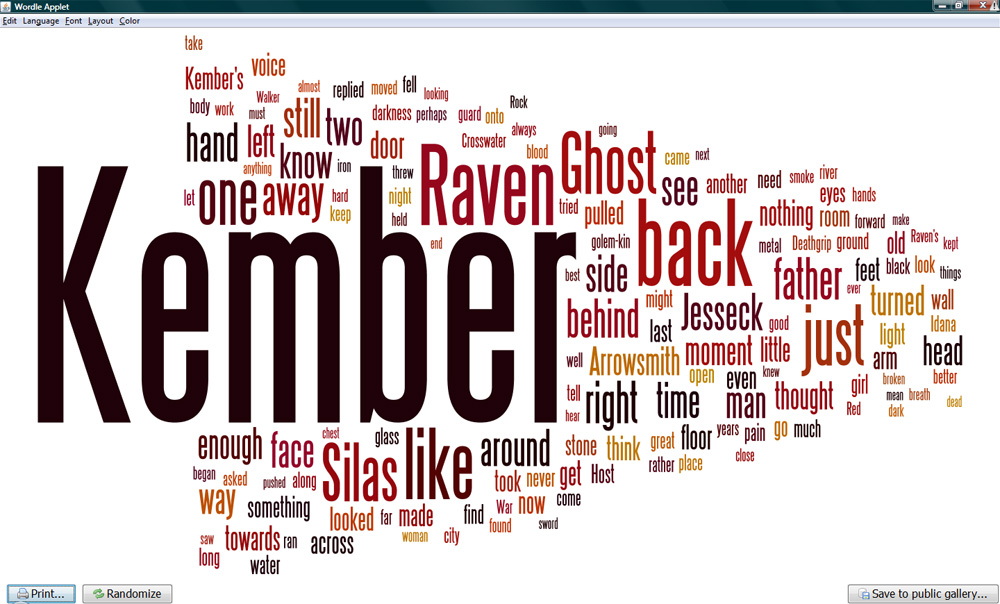 Okay, so what can I learn from this?

None of this is OH MY GOD LOOK WHAT I HAVE WROUGHT insight, but it’s useful stuff for the editing cycle. And as we know, most times editing takes a shitload longer than writing the book in the first place. (Christ, I hope that’s not true.)

So yeah, try plugging your work-in-progress in and turning it into a word cloud – you might see something unexpected. And if you do, feel free to come along and tell us all about it.

Now, back to staring angrily into the corner until a bottle of Wild Turkey suddenly materialises. It has to happen eventually.

2 replies on “Wiggle my wordle”

I *dread* to find out which adverbs I use the most. But I do have to start gearing up into editing mode. This is a good tool that I would have overlooked, so thanks for that.

I am also going to find the word “like” is more prominent than I’m comfortable with. Probably “fuck” as well.

That cloud has a disappointing lack of the swears.