Chekhov’s Law is generally couched as “if one shows a loaded gun on stage in the first act of a play, it should be fired in a later act”.

Here’s my corollary law for fantasy: if your wizard character casts an ice spell in chapter 5, they should have to freeze a lake solid to save the day before the end of the book. The fact that Merlin-9000 uses ice magic needs to matter, and it needs to create a meaningfully different story than if he used fire magic or forcibly converted all his enemies to Mormonism.

Or, more succinctly – magic needs to shape and be shaped by the narrative.

Yes, this is one of those places where my theories on worldbuilding bubble up and make me massively fucking annoying to talk to at parties.

So tonight, here’s a look at one of the two schools/fields of magic in the world of Raven’s Blood – what they are, what principle drives them, and how they feed into the story I want to tell. Hope you find it interesting.

The magic of the East

The magical traditions of the Eastern lands all rest on a single principle – change begets change. When a person, object or substance undergoes physical changes, they may mentally or supernaturally change in turn, and that change may foster and force more changes to follow.

Story function: The Easterlings and the Host were the enemies of the West, but that was 20 years ago; now the two cultures live in relative harmony in Crosswater. But invasions bring change in their aftermath, whether physical or social, and one theme of Raven’s Blood is looking at those changes and seeing how stable and/or how genuine they truly are. Basing Easterling magic on change – often degenerative, uncontrollable change – underlines that theme and pushes characters to think about their reactions to change and the Other.

Plus, hey, this is a YA story – the way I see it, such stories should always be about change in some way.

The esoteric, gross form of Eastern magic is sorcery – the direct channeling of otherworldly power through a human agent. Sorcerers deliberately induce changes in their bodies (or their minds, in some rare instances) in order to change their natures, opening themselves up to the powers of the Otherworld. There are various techniques for this, all risky, painful and difficult, but if they succeed then the sorcerer permanently gains a number of magical abilities. The process can also change the world around the sorcerer, bleeding into the land, mutating wildlife or weakening the fabric of reality – which is how the 27 members of the Host were able to enter from the Otherworld 300 years ago and enslave the Easterlings. The Host are masters of sorcery, agents of change that alter and corrupt the world just by existing, and the ichor in their veins is the most powerful of mutagens. Those changed by ichor – especially those changed involuntarily, perhaps due to being wounded by the Hosts’ powers or ichor-stained weapons – are called the blight-touched.

Sorcery is not a flexible form of magic – a sorcerer may manifest a handful of magical abilities that can only be used in a few ways. But it is powerful, especially when ichor is the mutagen that changes the sorcerer’s body – a blight-touched warrior might be totally impervious to blades, strong enough to toss a horse across a river or able to vomit clouds of gas strong and large enough to poison a regiment. In order to channel and contain that power, though, the warrior is changed – he might be nine feet tall, bulging with muscle, constantly streaming noxious vapours from his mouth and eyes or (of course) totally mad from constant pain or from the corrosive, inhuman influence of the ichor in his system. And that influence may warp him even further in future.

Story function: Sorcery gives me a way to include bizarre, twisted superhuman characters in Raven’s Blood, the kind that make for great villains. Brutes like Killer Croc or the Hulk are obvious options, but so are Poison Ivy, the Red Skull, Two-Face, the Human Torch, the Silver Swan, the Parasite… pretty much anyone that wears their power on their sleeve and doesn’t just look like a normal person. The corrosive effects of gaining power also let me include monsters, blighted lands and other unnatural phenomena, and I can tie it all back to the Host, the terrible reverse-Ringwraiths that are my spooky-as-hell boss monsters.

Sorcery also allows me to add a note of horror into the story (which I always have to do) thanks to both the grotesqueness of the blight-touched and the contagious nature of their powers. A character like Jack Twist the Scavenger Prince isn’t just disturbing because he can manifest a nest of whips around his mutilated left fist, glowing and writhing with ichor-blight, but because even if you survive the touch of his whips you may end up blight-touched in the process. That horror of involuntary change will, I hope, speak to the YA audience as much as it speaks to my YA protagonist. 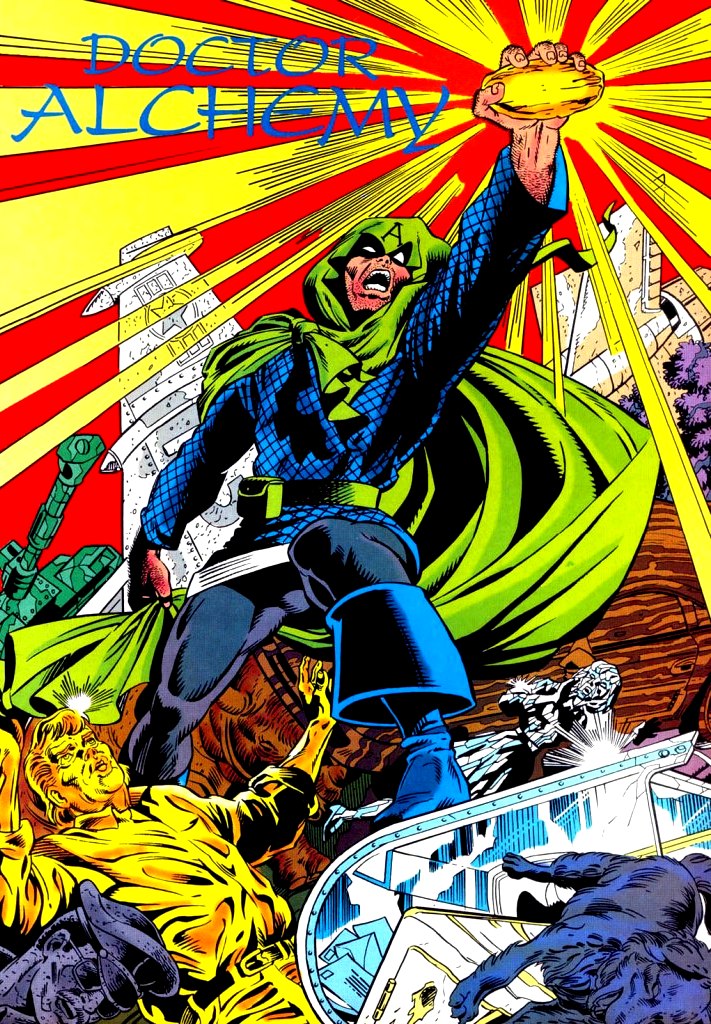 The mundane, subtle form of Eastern magic is alchemy – altering the properties of normal substances in order to create new effects. In its simplest, stablest form, alchemy simply creates stable and mundane substances with unusual uses, like curative poultices  smoke-powder or the burn-salt the Easterlings used to make explosives. More unusual alchemical substances are harder to make but can have limited supernatural effects, like oils that briefly render metal transparent or drugs that send you into a clairvoyant trance. The most powerful of these substances cause permanent changes when taken or used, opening the body to receive sorcerous power – and so, of course, they are forbidden.

Story function: Smoke bombs, baby, smoke bombs all the way. You can’t have fantasy Batman without smoke bombs and grenades and knockout gas and all those other wonderful toys. Alchemical tricks are a good way to give non- or lower-powered characters an advantage when dealing with their enemies, allowing me to write scenes where a careful, smart hero overcomes a monstrous, blight-touched villain and have those feel believable.

Alchemy also lets me present a more socially-acceptable, less terrifying facet of Eastern magic, in turn giving me story options for portraying the role of Easterlings in Crosswater society. They can be doctors, engineers, apothecaries and sages, capable of small miracles – but because alchemy can be directed into the service of sorcery, they still aren’t liked or trusted. And that distrust propels the social tension and fear that springs up when the threat of sorcery returns to the city…

Huh. That was wordier than expected. These things are so simple and straightforward in my head; it’s only when trying to explain them that they become long and complicated.

Anyhoo, tune in next week for a discussion of Westron magic and its story functions, as well as a bit of compare-and-contrast between the two world of magic and some thoughts on where else I could take things.

As always, comments are greatly appreciated so that I know I’m not just mumbling into an empty room after all the punters have gone home HELLO HELLO IS THIS THING ON