Apparently regular weekly, fortnightly or even monthly blogging continues to be too much effort for me to handle at the moment. Is it because I suck? Or because this is a fallen world in which the Throne of God sits empty and demons run wild to stoke and inflame the weakest and most despicable impulses of base humanity?

I mean, I know which one has the most evidence pointing to it. My intrinsic suckiness ain’t involved with The Bachelorette.

But anyhoo, some stuff has happened, is happening or will be happening now that we’ve hit November, so lemme talk about that for a bit before returning to the important work of patting my dog.

2017 has been notable in that I’ve felt like hammered shit pretty much all the time. Which is fine (note: not actually fine) if I’ve been drinking all weekend (note: don’t you judge me), but less great when it’s just a regular Tuesday morning and I wake up wishing I was dead (note: DEAD).

Poor sleep has been my biggest issue, so in September I took myself to hospital for an overnight sleep study. It was great fun (note: no it wasn’t), as you can see from the photo. 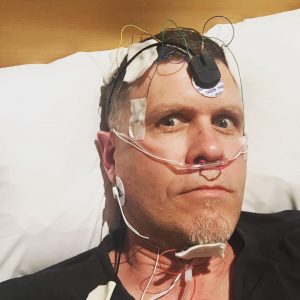 Turns out, really hard to sleep with all that crap attached to your head.

It’s kind of a crap thing to deal with, but at the same time I’m really glad about this.

Depression and ennui and self-doubt are hard to tackle and overcome. Physical problems? Those can be fixed! You can take a pill for those!

Or, more accurately, you can sleep with a hose in your face. 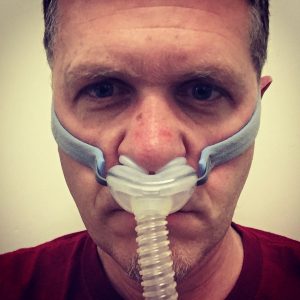 (Peter Ball has written on dealing with sleep apnea and crushing exhaustion, much better than I can, and he covers pretty much everything that needs to be covered. Go read him talk about it.)

Sleeping with a CPAP machine doesn’t magically fix all your problems – but damn, it fixes some of them. Since I started using it a few weeks ago, I don’t wake up exhausted in the morning, I don’t hit a wall of tiredness by mid-afternoon, and I don’t get home with a grey haze on my brain that drives me into bed by 8pm. All that’s pretty great.

What would be ideal is losing a bit of weight (note: maybe like 5 kilos? I’m honestly not that fat for a bloke my height) so that the apnea fades away. As for the UARS – well, that will probably improve if I drink less alcohol, which would also help with the weight (note: it’s like some circle of life shit). If I can get all that under control, there’s no need for the CPAP machine, and Hoseface can go hang out with the rest of the Nightbreed.

What’s all this got to do with writing?

Not a lot just at the moment, admittedly. But it means that there are more hours in the day in which I can write – when I actually have the physical and mental energy required to sit down and bang out words without greying out or shutting down.

Is that happening? Yeah. A little bit. Not enough to be worth noting as yet – but still more than a few months ago.

In a few days I’m hitting GenreCon in Brisbane – going to workshops, talking to other writers, singing karaoke, drinking with friends (note: but not too much, ‘cos of the UARS thing), networking and, most of all, reconnecting with writing. (I would say ‘getting inspired’, but I feel a bit silly using phrases like that because I’m a dickhead.)

Will I come back next week raring to go, pound my way through Obituarist III by the end of November and start writing about teenage wrestling-mages by December? Umm… possibly/hopefully the first part of that; probably not (note: yeah, nah) the second part. But even the first part wouldn’t be happening without 7-8 hours sleep every night – so if it does happen, we can thank Hoseface.

Let him be your new favourite Marvel superhero. Thor can piss off.