I’m striving to get back to my original concept of short, breezy mid-week post and longer weekend posts, so I’m gonna attempt to quickly chat about a few things tonight and then get back to the cool mysterious things we writers all do in our personal time.

First, a sad note: Australian fantasy author Sara Douglass died this week of cancer. She was one of this country’s most successful and prolific epic fantasy authors, and the success of her work in the 1990s contributed to the genre becoming more financially viable  for publishers in the 2000s

Her death is a personal shock and sadness to a great many fans. I’ll be honest, I’m not one of them – I never knew her and never read any of her work. But that doesn’t mean I don’t regret a successful writer, and by all accounts a lovely person, being taken from both genre readers and society as a whole.

More to the point, I have read an essay of hers, ‘The Silence of Dying’, about the layers of social avoidance around acknowledging our own mortality and that of others, and it’s a moving and insightful piece. You should all read it. 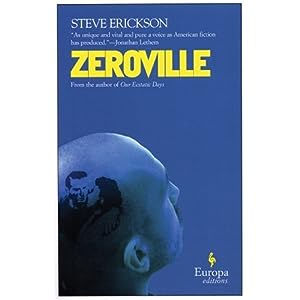 In terms of ambition, Zeroville – a history of 1970s Hollywood, obsession, the story of Abraham and Isaac and the way meaning emerges from fog through the imposition of narrative – is an incredible book. Erickson also wrote The Sea Came in at Midnight, another excellent book, and he’s a true craftsman of tone, structure and theme. His books don’t really end cleanly or make a lot of narrative sense at all times, so they won’t appeal to everyone, but if you like arty literary stuff with a big big dose of magical realism and menacing absurdity, this is the real deal.

Tomato Red doesn’t aim at anything like the same territory; it’s a more unassuming country noir tale of losers trying to get out of their dead-end world and doing a bad job of it. Its power comes not from the story but the narrative voice, a warm, funny yet sad tone set by the viewpoint character, a man who knows life will kick him in the balls but still stands legs akimbo when the job demands it. I’m enthralled by this book, and wish I wasn’t about to finish it – but I’m now about to track down everything else Woodrell has written in the hopes of finding more stories and voices like this.

For the curious, I’ve written exactly zero words of Arcadia over the last two weeks, as I have instead been writing about kayaks. Not for a novel or ebook, but as a freelance job. It paid well, so it took priority. Now that’s done, I hope to get back into the novel – I’m in the last chapter of Part I, and I need to find a way to raise the stakes and put things in a state of change prior to skipping ahead three months. Plus I want to work in some mentions of Jesus and Alan Jones in there.