So I’ve been talking about how pro wrestling is a great space for communicating character and story through action – but talk is cheap. What does that actually mean? How do you use ten minutes of sweaty grappling and backflips to define a character, and what kind of stories can you tell through that platform?

I was going to wrap up this series of pro wrestling posts tonight and get back to beating myself up for my lack of productivity, but I kept finding new stuff to write about (and distracted by other stuff, which is why this Monday night post is going up on Friday night) – so let’s assume this is (at least) a two-part post and use part one to set some foundations, with a look at something everyone already knows about – World Wrestling Entertainment/WWE (and also NXT) – and what lessons might be learned.

Even if you’ve never seen a match in your life, you know about WWE; they’re a multi-billion dollar company, the single biggest wrestling organisation in the world. They have two big weekly shows (Raw and Smackdown) on regular TV, monthly pay-per-view events (even bigger shows) and their own $10-a-month wrasslin’ Netflix with more shows than I care to contemplate. The WWE Network is also the home of NXT, their ‘developmental’ offshoot where new performers build their skills/discipline before graduating to the main roster; just as importantly, it’s where they build an audience so that anyone cares about that graduation. 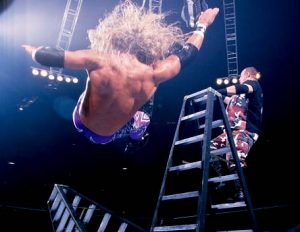 A lot of folks I follow on Twitter, or who make podcasts I enjoy, are really into the current WWE promotion, or more directly into NXT, and that background interest is probably what drew me back to the sport after a decade away. It’s kind of sad, then, that I find their current product, well… kind of boring. Compared to the flash, speed and silliness of the Attitude Era (late 90s-early 00s), or even the mid-2000s, the current WWE/NXT style of wrestling is more low-key and PG-rated. The focus is on mat-based wrestling, with a mix of technical grappling and strength/power moves – there’s very little aerial wrestling, use of weapons/tools or straight-up brawling. In many ways it’s a ‘purer’ form of wrestling, but I can’t help but miss table/ladder/chair matches. (Lesson: when you set a tone early on, it’s more difficult to bring that tone down and retain readers than it is to raise the stakes and escalate.)

Risk aversion is sensible but boring

The other big change is in the attitude of the corporation, which has come to really emphasise the ‘professional’ in pro wrestling. WWE is a  big, big business, and they don’t want to jeopardise that business by relying on unpredictable, idiosyncratic wrestlers with their own style or ideas about things are meant to work. The result, to my biased eye, is a growing homogeneity among the wrestlers, who are all drawing from the same set of moves and character concepts – moves and concepts largely chosen by an external group of coaches, managers and marketers – rather than bringing their own individual style and flair. And I get that, because you want a reliable and commercially viable product, and for your staff to be safe from injury due to unpredictable circumstances, but it makes it hard for me to tell many of them apart, or to care which one of them wins the day. (Lesson: you don’t have to play it safe, and you can depict any kind of character doing any kind of thing. SO DO THAT. Leave the homogeneity for the real world.)

Stick to the schtick

A lot of character development in WWE comes through visual flags – a wrestler always dresses a certain way, has a specific entrance, uses identifiable gestures. Similarly, every wrestler has signature moves and catchphrases that they’ll use in almost every match and promo – things that reinforce the character in your mind, that make them memorable even if you can’t connect that memory to a specific action or event. That’s a technique that’s very powerful in visual media, but can also be tapped in prose storytelling. (Lesson: set out simple, short signifiers for a character like a piece of clothing, a phrase or even a radical haircut, something you can describe in five words, and drop them into scenes so that readers get that instant bit of connection.) 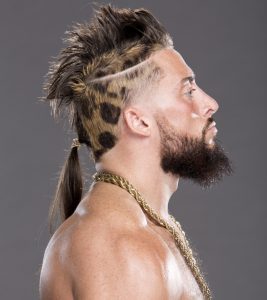 Use all your tools – but use them properly

WWE make heavy use of promos, vignettes, backstage skits, brief interviews and other non-match showcases to build character, but their in-ring character development is a bit lacking; the current product doesn’t do much to showcase agendas, motivations or unique traits once the bell rings to start the fight. Almost all of that comes before and after, which is maybe the main reason I find their stuff a bit dull right now. Still, all of that developmental material works in building character nuance and substance. What doesn’t work is when the announce team just tell you a character is awesome, even when you can see that they’re a bit shit. WWE have been doing that for years, and if anything it’s even more distancing and annoying now that the video quality is so good and you can see mediocre characters underwhelm you in HD. (Lesson: character can come from lots of interactions and presentations, big or small – but keep the focus on what characters do, and don’t forget about ‘show, don’t tell’, okay?)

We don’t talk about the weird stuff any more

WWE’s storylines used to have a few weird and strange elements, but that’s largely been excised these days. Modern storylines revolve around professional rivalries for belts and prime roster positions, which bring larger paycheques and more merch opportunities. In other words, they’re wrestling stories about wrestling; the business is about the business. That has potential for metatextual shenanigans, but they’re rarely explored, and the end result is a storytelling environment that leaves me kind of cold. At the same time, the rare inclusion of a new element – a personal grudge, a lapsed friendship, a reflection of external factors – is just enough to stand out and get my interest, even if it’s never anything as over-the-top as the Undertaker fighting Kane in the fires of Hell. (Lesson: it’s good to set a baseline of realism, but staying there is kind of boring; look for ways to make stories be about more than their own immediate, sensible and predictable contexts.) 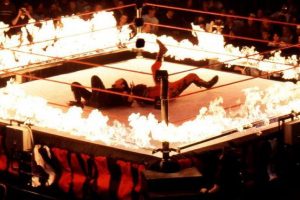 Good pacing makes up for many sins

The thing that WWE really understands these days, after decades of experimentation, is the rhythm of action storytelling – the pacing skeleton that supports all manner of wrestling meat. A standard WWE feud starts just after a pay-per-view, with hostilities rising between two wrestlers; at the next PPV they either settle things (short arc) or the situations escalates (medium arc). There’s a consistent, engaging build with peaks and troughs, highs and lows – something that gets you pumped and then lets you cool off. Matches are the same; the rise and fall of energy and spotlight in a WWE show is so crisp you could graph it. (Well, usually; I hear the recent SummerSlam PPV was 6 hours long, peaked too soon and burned the audience out by the halfway mark.) (Lesson: knowing the rhythm and flow of fights and stories is more than half the battle of conveying both effectively.)

I signed up for a free month of the WWE Network; that subscription renewed today, and that’s fine, but that’ll do. That gives me time to watch some of the ancillary shows (Breaking Ground is intriguing) and the Cruiserweight Classic, which is my kind of flippy-skippy wrestling, and maybe to take a few more notes on Raw and Smackdown. After that, I think I’ll be happy enough to let it lie. WWE have their own thing, and it works very well for their audience, but I’m okay with not marking out for them any more.

Who do I mark out for? And plunder for storytelling ideas?

Let’s find out next time.

One reply on “Plot, character, piledrivers”

I’m with you on risk aversion being a killer. Case in point being a Cthulhu game where one character wants to flee town for self-preservation, and another reads from a creepy magic book at every opportunity. One of them may be more realistic, but the other has more interesting stuff happen.

On the point of Wrestling + RPGs — I’ve never been into wrestling, but now I think I see how you’ve made it work. Well done!
Hmm, I think I’d have a character who hits people with a prop gas cylinder, with an in-the-ring name: Pro-Pain.