Hey, remember last week when I dropped some flash fiction on you?

Well, the fiction train continues to roll out of the station this week, with the release at Smashwords of a new short story, ‘Pension Day’, which is TOTALLY FREAKIN’ FREE to download in whatever format you desire! 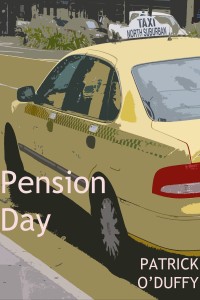 (As usual, the MOBI and EPUB versions on Smashwords are good, but the PDF doesn’t include the cover; I’ll do my own PDF version and put it on the Downloads page in a couple of days.)

‘Pension Day’ is… well, I pitched it as a crime story, and it is about a criminal and his enterprise, but there’s also a bit of horror and suspense in there. It’s pretty nasty stuff, in its own way, but hopefully some of you little droogies like that sort of thing. If you do, I hope this story works for you! Feel free to tell others about it, to send the file on to potential readers, to share it to your heart’s content and to spam social media with your wild, unrepressed love for my genius. (Ditto for any of my free downloadable stories, of course.)

For the curious, ‘Pension Day’ is pretty damn new, written only a couple of months ago. I wrote it as a submission for a local crime fiction project, but the editors passed on it – which is perfectly cool and not something that bothered me. So I thought I’d submit it to some other avenues, but to be honest I couldn’t think of any, and didn’t have the time (or, to be honest, the inclination) to do the research. So this piece was gathering virtual dust on the hard drive for a while, and last week I decided that it would be better to release it into the wild than just forget about it. Which is a decision that I imagine more and more short fiction authors make these days; you might not make any money from a epub story like this, but at least it’s out there and doing its job (entertaining readers), and that may be more important than getting fifty bucks for it.

Or I could just be lazy. Always a possibility.

So that’s two short stories on two consecutive Sundays. Can I make it three for three? No promises, but let me see how the next few days pan out – because there’s a short piece about a certain Kendall Barber that I’ve started writing…

In other news, my Freeplay panel was today and it was great fun! Our ‘Sex and Death’ panel looked at how those themes are treated in video games (short answer: not that well most of the time), why those themes appeal to us, whether ‘mature themes’ had to mean ‘darkness’ and how indie game developers might approach those themes in different, more creative ways. We didn’t get to cover all the ground we might have liked – it’s more difficult to discuss ways of approaching sex and sexuality in games than it is to discuss death and/or violence – but the audience seemed engaged and the Twitter chatter was primarily very positive.

So that was terrific, and the capstone of what’s been a big festival-involvement year for me. I wonder if I’ll do more next year. Time will tell.

Also in other news, the third and last part of my discussion/interview/lovefest with Hugh Grimwade is now up at his site. And this time shit gets nerdy, as we discuss games, shared worlds, comics writing and (of course) Batman.

This was such a fun interview, played out over months of back-and-forth emails. It’s also reminded me that I haven’t done an interview here in a while – so look for that to change soon. And this last part has me thinking a lot about comics writing, and whether I should try to find an artist or two and get a project together. Will mull over that some more.

In other, other news, this racking cough that I’ve had for two weeks CAN FUCK RIGHT OFF.