I want to talk tonight about what I liked about a book I didn’t like.

…okay, that intro could have been clearer.

Last month I decided to check out some books published by Angry Robot Books, which are putting more and more SF/F/H books out these days. I didn’t really care what I read; my main interest was seeing what the standard of editing and typesetting were in their books. Which is normal, right? Plenty of you just grab books at random from library shelves because you want to check on the level of skill and care taken in their production, right?

Anyway, I looked at Angry Robot’s Wikipedia page and grabbed the first novel by the second author listed (after Dan Abnett, as I’d already tried and quickly cast aside his Triumff.) This was Guy Adams’ The World House, and frankly it’s not very good. It has a decent premise (there’s a surreal and spooky house inside a box and shit’s going down) that’s let down by pedestrian writing and clichéd characters and dialogue. (As for the typesetting and editing, there were a few glaring errors but on the whole it was acceptable.)

Let’s start with the front image:

Really strong sense of design here that makes the most of a stark black-and-white palette for maximum contrast. Bang – title. Bang – spooky house. Bang – author name. Lots of hard lines and blocks with occasional curves to break things up. And then you’ve got that single spot of red in the window that pulls in your eye and tells you that something important is up in that room. Add in the intro sentence at the top and the whole point and premise of the book is spelled out to immediately grab your interest. Personally I wouldn’t have bothered with the moth and the pull quote from Kilworth, but then again I’m not a professional designer and they’re more likely to be write about this than I am.

So that’s a really strong front cover that stands out in a shop or in a set of Amazon listings, and that’s a hugely important thing. For a lot of publishers that would be enough. But Angry Robot really went the extra mile with an amazing back cover: 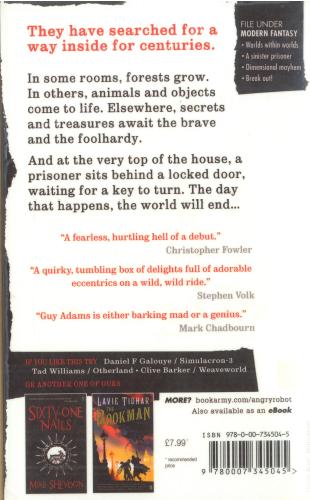 (Sorry about the drop in quality; I had to scan it myself because no-one bothers showing the back cover of books online.)

Let’s look at each part in turn:

Wow, this turned into another long post. Why am I incapable of using fewer than 1000 words to say I liked something?

Anyhoo, I don’t really want this post to foster discussion about either The World House or Angry Robot. I didn’t like this book, sure, but I’m looking forward to Chuck Wendig’s Blackbirds (which also has an amazing cover) and I’ve been hearing great and intriguing things about Adam Christopher’s Empire State (ditto) which are both from this publisher.

What I’d rather talk about is what you think of this cover design, front and back. What do you think works? What doesn’t? What would you do differently? What are some cover designs – especially back cover designs – that have grabbed your interest and packaged information in a really effective way?

And, most of all, what are some ways that ebook authors/publishers, who don’t have the luxury of a back cover, can format and deliver this kind of information without just dropping a bunch of text onto a title’s Kindle Store page that no-one will see because they don’t scroll down far enough?