Having put up my cruddy Word-drawn map of Crosswater last week to deafening acclaim – I must be deaf as I didn’t hear anything – I’d like to follow up with my map of Port Virtue, the seedy seaside city that is the setting of The Obituarist. It’s equally cruddy, but I think it shows how different stories have very different priorities, and how place can work very differently.

And now, through the magic of <insert text box>, I give you: 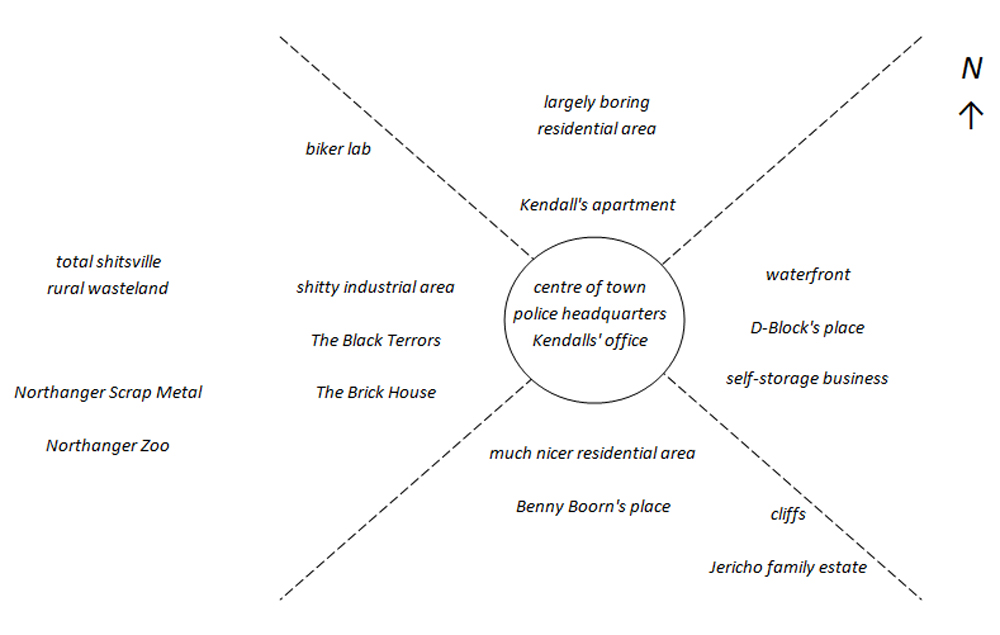 What the hell kind of map is this? I mean, last week’s attempt was a bit rubbish, but it least it had some proper features like rivers. This is just some words and an arrow pointing north – might as well be a mind map!

Well, yes – and it nearly was a mind map, but that started getting messy.

When I looked back through The Obituarist to make this map – because I’d never drawn or envisioned one while writing it – I discovered that there was only one statement about a physical direction in the entire book. (Someone says ‘west side’ towards the end of the novella.) And yet Port Virtue is clear in my head – a run-down faded city of harsh lights, broken concrete and crappy nightlife – and readers have said to me that it’s been vivid for them as well. But all of that comes out through tone and from individual scenes, rather than how those scenes and places sit alongside each other.

Not every story needs a map, and not every map needs to show physical things. This diagram shows me tone more than anything else – there’s the boring part of town, a shitty part, a wet part where people probably get drowned, a relatively nice parts my stories will probably never visit and so on. Even though I have a rough direction marker, thanks to that one bit of dialogue, the important thing is seeing that if Kendall goes back to the crappy part (and he will) then it gets even crappy further out; if he stays at home he’ll get bored; if he goes into the middle of town there are cops on his arse again. That’s what I need and that’s what I think my readers want, more than a sense that Kendall can see the Brick House from his balcony.

As I said, I made this map after the fact (specifically I made it last night), and most of that work was trying to work out where various locations fit into my… let’s call it a ‘tonal gradient’ because it makes me sound clever. That’s an interesting experience – like trying to puzzle out directions that I’d forgotten I’d written, possibly due to drunkenness at some point.

It’s like – okay, D-Block’s hideout is on the waterfront, that’s obvious. But the Brick House is in the shitty industrial part of town, and that turned out to be on the other side of the city. The biker lab must also be over there, because it’s crappy as fuck – but it’s in an old housing district, so it’s probably near a residential area, and probably the boring part rather than the nicer part. Where should I put the storage place? Waterfront sounds good.

It’s part detective work, part jigsaw puzzle, part throwing shit to see where it sticks – and it’s kind of fun. If your story is done and you never created a map for it, there can be value in going back to it and working out where everything goes, whether physically or conceptually. It can help you see connections that hadn’t occurred to you, suggest ideas for further events and even encourage dreams where the old Clint Eastwood biker guy has brunch with Benny Boorns.

No districts, no place names, no fiddle-dee-dee

The Obituarist is around 22 000 words long. I ain’t got time to be naming things! I can’t indulge my little fetish for portmanteaus; place names chew up wordcount every time they appear. Ditto descriptions of places as discrete units, or attempts to flesh out the context of the snippets of space I have for setting scenes. No, no time for that; just tone and purpose, that’s all there’s room for.

A shame. Shitsville Acres is really quite lovely in the spring.

Like most modern cities, I figure Port Virtue doesn’t have a wall around it or a distinct start and finish. One moment you’re driving down a rutted highway, then you pass some crappy houses and burned-out trucks, and a couple of minutes later you’re being carjacked in a traffic jam and wishing you’d gone to Zurich for your holiday. Cities are smears on the landscape, and a lack of a formal boundary helps give that sense of reality to your place.

It also gives room to add more detail as ideas and stories demand. The cliffs and the Jericho estate come from the semi-sequel short story ‘Inbox Zero’ – completely free to download, if you haven’t already – and I figure that the Jericho Bible printing factory is somewhere along the waterfront. And out further west, we see a few hints of what’s coming in The Obituarist II: Electric Boogaloo, which I’ll be working on as soon as I finish with Raven’s Blood. Who is Old Man Northanger and why does he have a zoo and a scrap yard out in the boondocks? You’ll find out soon enough – and learn the terrible secret of what lurks in the boring part of town!

Well, maybe. Still working that part out. And it’s probably not that terrible a secret. Not unless the next story involves Scooby Doo.

…I’m not ruling that out.

I hope some of y’all agree. Speak up if you do. Or don’t.

One reply on “Month of maps – The Obituarist”

This is an interesting way of doing a setting map that I hadn’t thought about before. I think you’re right that with a short story/novella you don’t have the time to flesh out locations.

If I were going to try something like this (and I am 100% planning to steal this idea for all time) I would graft on the FATE idea of fleshing out locations with aspects like “busy and impersonal” or “smells like murder” or whatever. In the process of writing they might translate into themes or motifs or some other writery gimmick like that.

For my novel set in a fictional town in the real world I drew all over a Google map image of the area, adding geographic features like rivers and an escarpment. Because I am a sad cartographer wannabe with far too many years of lonely-fun DM’ing behind me 🙂