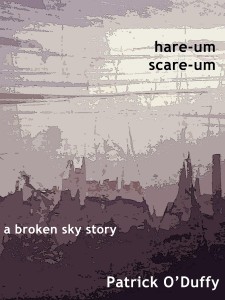 I just want to make a quick post tonight to say that I’ve posted a new piece of flash fiction up on Smashwords for free download, available right now!

In the future, the Earth is still recovering from alien invasion, conquest and liberation; civilisation is shattered, the sky is broken and the world will never be the same.

But Nadger doesn’t understand any of that. All he knows is that it’s time to hide before the other kids find him!

I wrote this story a few months back for a flash fiction competition; it didn’t win, so I started looking around for paying flash markets to submit it to and couldn’t find any. (I’m not saying there aren’t any; just that I couldn’t find any.) Rather than give it to someone else to publish in return for exposure, I prefer to expose myself – and come on, stop that, you know exactly what I mean.

‘Hare-um scare-um’ is the first in a loose, irregular series called ‘Broken Sky Stories’ – flash pieces set in this post-apocalyptic pre-rebuilding Earth, a place where the old order is gone and a new order – maybe even a new reality – is still being put into place. That’s a concept that appeals to me; I tend to like the idea of writing about the aftermath of big events more than I do about the events themselves.

No promises as to how often I’ll write these – the only true answer is ‘as ideas come to me and I find the time and energy’. But hopefully that means at least a few times over the next 12 months or so.

Once again, ‘Hare-um scare-um’ is free at Smashwords now; it should propagate out to other ebook sites over the next few weeks. Well, except Amazon; they only like free books if they’re the ones setting the price point. So it goes.

It joins a number of other totally free/gratis/no-cost/ZOMG short stories on the site:

I’ll also do a slightly nicer PDF version and put it up on the Downloads page of this site too at some point. That page is increasingly out-of-date; I really need to overhaul it soon.

But not right away, because I’m going to Europe next week!

Townsville, which is not in Europe!

I’ll be gone for about two weeks, but the lead-up and wind-down from travel is likely to make blogging either intermittent or non-existent for close to a month. Rest assured that even if you don’t hear from me I am a) having a good time, b) working on Raven’s Blood, c) wishing more people would buy my ebooks and d) probably drunk.

Wish me luck, and I’ll catch you later in the year.