In Sean Howe’s fascinating book Marvel Comics: the Untold Story there’s a bit about Chris Claremont, whose seminal run on Uncanny X-Men defined pretty much the entire superhero genre in the 1980s. Apparently Claremont was completely disinterested in the action elements of the comic, usually letting artist John Byrne take charge of those with a note like ‘fill three pages with fight scenes here’; left to his own devices, Claremont would have just let the X-Men argue with each other in coffee shops about who was sleeping with who.

Stories like that, or the Gail Simone anecdote about an unnamed colleague who would just copy-and-paste the action scenes from previous scripts and then change the names, make me want to find these writers and shake them like Polaroid pictures, and not in a sexy way. To have the opportunity to write a great, meaningful fight scene and say ‘oh, I don’t care about that, just draw dudes hitting each other’ makes my heart fill with sorrow. Sorrow and kickspolde.

For my part, I freaking love fight scenes – in movies, games, comics and (especially) prose. Not because I am a hairy-knuckled thug who just likes watching biffo, but because fights scenes are one of the most enjoyable, effective, flexible weapons in the writer’s arsenal. Engaging fiction revolves around action, in the sense that it involves characters acting and doing things, and fight scenes are a powerful way to make that principle manifest. I’m finally getting the chance to write them in Raven’s Blood and they are huge fun, and I find myself wondering why I didn’t write them before now.

So then, in no particular order and at no great length, here are some things that fight scenes provide or illuminate and why you should write them.

Drama is founded in conflict, about two characters or factions competing for something that only one can win. Fight scenes push conflicts into the foreground of your story and make them overt, make them something that can’t be mistaken, and escalate them so that the fallout can’t be ignored in future conflicts.

And conflicts aren’t just about me-vs-you, either; they’re about the setting of stakes and defining what each party is trying to achieve. Again, fight scenes make this explicit, especially when the stakes are very high, such as ‘stop Mega-zilla from eating the world’ – but they also throw smaller stakes into sharp focus just from incongruity. There’s also dramatic potential in mismatched stakes – two parties trying to kill each other is a very different story if one party is trying to escape instead.

Is your character confident? Overconfident? Highly skilled? Lucky? Capable? In over her head? Nothing showcases and demonstrates a character’s traits like throwing her into action. Portraying character, after all, should be done through showing rather than telling, and fight scenes are all about showing, about acting, about writing with strong verbs – about your character applying her skills and style to shaping the narrative, and possibly also staying alive. Even minor, seemingly cosmetic things like tool use can reveal character in a fight; any gamer can tell you that ‘dude with a battleaxe and shield’ feels totally different to ‘equally skilled dude with a rapier’, and both are different again to ‘nun with a shotgun’.

You think I’m going to quote Chandler and ‘When in doubt, have a man come through a door with a gun in his hand’. And yes, that’s a good way to use a fight scene – to kickstart the plot’s energy when it flags or when you don’t know where to go next. But more pertinently, plots are driven by conflict, and we already established that fight scenes emphasise and demonstrate conflict. That makes fights a powerful force multiplier for plot, because pushing things into a physical confrontation leaves you with a whole host of consequences to follow up. Who got injured and now needs to recover? Who got killed, leaving a power vacuum that must be filled? What got totes blown up and needs to be rebuilt – and what might be found in the ruins? High stakes lead to major consequences, and major consequences reshape the flow of plot.

On the micro level, fight scenes are an excellent avenue for description; you need to let the reader visualise the physicality of the scene before you set it all on fire. Very few fights happen in featureless white rooms – although that would be an arresting image – and an engaging fight is one that takes in the landscape, tools, bystanders, chandeliers and other features of the environment, letting you describe in context without pausing for exposition. On a macro level, fights can also be used for worldbuilding, demonstrating the weapons, techniques and attitudes of your fictional society. A society where duels are accepted practice is different to one where they aren’t, and a society where duels are fought with giant poisonous flowers (as in The Book of the New Sun) is different again.

Is your story serious? Then fights are a chance to show broken bones, horrific pain and ruined lives. Is it a story of melodramatic derring-do? Then fights might be a romp where a hero fights off a legion of mooks with only an umbrella. Light adventure? Then all those impossible kicks and last-minute escapes result in no more than bruises and injured pride. Fights are one of the best way of establishing the tone of your story, especially in genre pieces, because they let you flag all the way physical conflict is different from how it is in the real world, and that puts readers on the same wavelength so that they understand the flavour of your gritty thriller, superheroic adventure or cartoon escapade.

But tone is also a tool, and one you can use in many ways to keep the reader on their toes. A fight scene is a great way to make a light story suddenly feel serious, or blow off steam by turning a horror story into an occult adventure. Consider one of my favourite movies, Grosse Pointe Blank. For all that it’s about a hitman, the first two thirds of the movie has almost no action and works as a tongue in cheek, self-aware romantic comedy. Then Benny the Jet shows up and kicks the fucking shit out of John Cusack before getting stabbed in the neck in an amazing fight scene that takes a sharp turn into gritty, messy violence. Suddenly the tone is different, suddenly we take the story more seriously; suddenly the stakes – both physical and romantic – feel a lot more real.

Fuck, I love that movie. 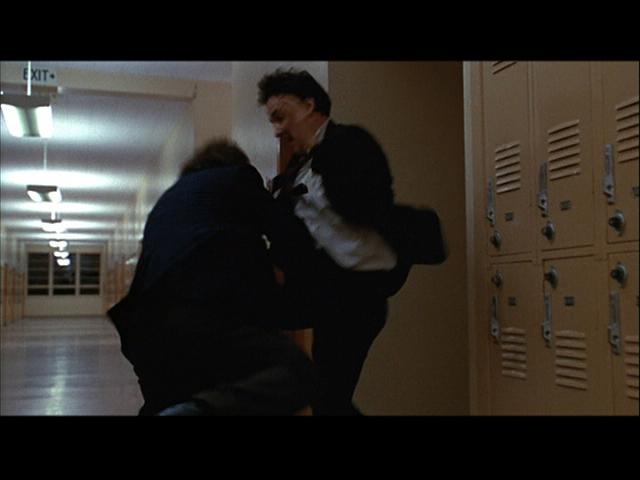 Over and below the level of  plot, the question of what your story is actually about is one you should be addressing – and the best way is almost always through action. Fight scenes won’t illuminate every theme, but you might be surprised how much resonance can emerge from a punch-up that reflects your story’s meaning. If your story is about the price of success and the need for sacrifice, then a fight is a desperate, terrifying clash won only after losing an ally. If it’s about great risk leading to great reward, then a fight could be a kung-fu dust-up on the wing of a biplane with the fate of a city in doubt. And if your theme is ‘with great power comes great responsibility’ or something like that, well, there’s a whole library of fight scenes that have showcased that and similar themes over the years. You should read some of them. 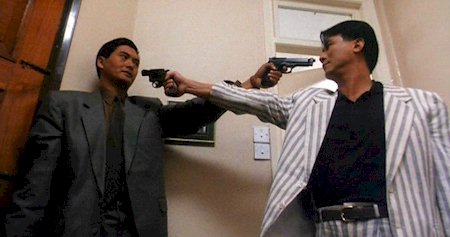 Look, let’s just admit it – fights (fictional ones) are fun. They’re exciting, they’re entertaining, they’re full of colour and movement and stunts – and even the realistic ones are tense and gripping in that oh-god-I-want-to-look-away-but-I-can’t kind of way. A boring fight is hollow and pointless, providing no push to see what happens next – it’s like a cheesy karate-fight in a bad 80s action movie. But a powerful, entertaining fight scene draws you in, keeps you in suspense, makes you care about what happens to the characters – and then, having caught your attention with bullets and body blows, makes you care about everything that happens between the fights as well. For further illustration of this topic, see every film John Woo and Chow Yun Fat ever made.

This is what I love most of all about writing fights – all the various ways you can whip up pace and movement and flash with just words. Fight scenes are a time for exclamation marks! ALL-CAPS SOUND EFFECTS! Adverbs! Adjectives! Run-on sentences that evoke a breathless rush and panic and then he turned to smash the zombie with a baseball bat but suddenly –

– there was a jump cut to another scene made with a hanging emdash!

And so on. Writing a fight scene lets me change up my game, vary the voice and style, break all the rules of my story’s grammar and do something different, something with a frantic energy that the story can’t sustain in the long term but that briefly facepunches the reader and then bodyslams them into the rest of the narrative.

Exclamation marks are a hell of a drug.

None of the above means that you must include a fight scene in your book, obviously. It’s not like Love in the Time of Cholera or Middlesex would have been improved by a car chase or a rooftop shootout. But if your genre and voice allow such things, if your story has a place for physical as well as emotional action, try to explore that space.

Jump in and give it a bash – possibly by having a character jump on someone and bash them.

Half way through reading this, I was thinking: must comment about one of my favourite fight scenes, from Gross Pointe Blank. Wait, what that’s picture…?

That scene is not just a change of tone, it is a great example of two trained people trying to kill each other with desperation and efficiency. As such, it’s more effective than many flashier spectacles.

The fights in Troy are really well done too — for similar reasons but with more traditional weapons.

(Not that I will claim to have any real knowledge of fighting techniques and how they appear on screen.)

[…] And on that note – and because I don’t have a whole lot to say other than ‘hey doodz, I’m back’, I’ma gonna get back to work on the book. There’s a big fight scene I have to complete – and as we know, fight scenes are awesome. […]