In one of those totally normal coincidences, I learned about The Elevator Game after running into two totally separate references in a week – one in the Tanis podcast (which I wrote about last week, and which has since become one of my favourite things) and one in the new edition of the Unknown Armies RPG (another favourite, and currently on Kickstarter). And ever since, I can’t get it out of my head; I can’t stop feeling genuinely unsettled by it.

So what’s the elevator game? According to various places on the internet, it works like this: The elevator game seems to have originated in Korea, and it’s just another one of the weird creepypasta concepts that people post about on reddit and the like. There’s a lot of this stuff out there; it’s the kind of silly, offbeat nu-horror idea that made John Dies at the End such a crazy fun read.

So why do I keep thinking about it? And why does it creep me out? I think there are three reasons.

The elevator game falls apart the moment you think about it – not just because it’s supernatural, but because it’s ridiculous. How was this discovered? How was it tested? If you have to do it alone, how do we have stories about people who never made it back? How do we know not to speak to the ‘girl’ if speaking to her results in death/disappearance? Who told you about this? What the hell is this crap?

All of that should rob the ritual of its power, but instead, it somehow makes it more compelling. The game feels like a secret revealed, something shown to us by an outside observer or force, like the way demon-summoning rituals have been said to be provided by the demons themselves rather than worked out or created by mortals. And the nonsensical nature of the game reinforces this; there’s a kind of… confidence there, an assertion that the game doesn’t need to pander to ideas of sensibility in order to work. It’s a middle finger to reality; a finger that then crooks to beckon you forward. 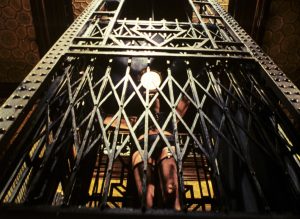 It’s arbitrary in all the right ways

To take that last point further – why elevators? Why 10 floors? Why is there a girl? What is she and what does she want? Why is there a red cross visible through the windows? How the hell does any of this make any sense? It doesn’t, and there’s power in that lack of sense. It suggests that reality isn’t just stranger than we know, it’s stranger than we can know – that applying logic and reason to the world is a fool’s errand, and that clinging to those notions will get us killed/lost/unmade in a world that we never truly knew.

(You could even say that this is the hook in every horror story, even those that deal with well-known tropes like vampires and curses. The protagonist thinks they know how the world works, but the story tells them (and you) that YOU ARE WRONG. Too bad for them/you.)

Similarly, the morality of the elevator game is arbitrary – not cruel, but not justified either. You can be a perfectly decent, upright person, but you say hello to a woman on an elevator and you’re lost forever; you can be a awful bastard, but if you do the steps right then you’re free to go explore the otherworld and maybe steal money from empty hell casinos or something. The game doesn’t care. And despite our protestations, deep down, most of us want to believe there’s justice in the world; that bad things don’t just happen to good people. But they do, because life is arbitrary despite all our attempts to impose our rules on it, and stories that reflect that get to us.

I kinda wanna try it

It would be easy. So easy! There are so many suitable buildings in downtown Melbourne. I could print the instructions and just follow the steps. It’s just silly weird nonsense. What’s the worst that could happen?

…well, nothing, because it’s just fiction. But it’s tempting fiction, the same way supernatural stories and tricks and parlour games have always tempted us. From ouija boards to secret handshakes to urban legends, there’s a pull to stories that let us dabble, or pretend to dabble, or pretend to pretend to dabble in the supernatural, even if we don’t believe in it. Especially if we don’t believe in it. Because the voice in your head saying it’s all rubbish, it’s silly fun, do it and laugh at the credulous is also saying, in a subliminal whisper, but what if it works?

Any story that gets into your head, that makes you say to yourself but what if?, even if you then deny it, has power. No matter how ridiculous.

So why spend 1000 words talking about this? Partially to get it out of my head; partially to play with some ideas that I might return to in the horror story concepts I’m working on.

Partially to get some of you a tiny bit spooked on an otherwise unremarkable night.

…partially to see if anyone else wants to try it.

3 replies on “Elevator to the Netherworld”

I always liked the sound of The Midnight Game myself (there’s even an Aus. horror film based on it).

I’d never heard of any of this stuff before (other than having seen some creepypasta-style ideas somewhere). It’s very cool. Makes me want to make up lots of weird urban myths and then trick myself into believing them.

Thank you again for putting me on to the Tanis podcast – I’m looking forward to seeing what gets folded from its techniques back into The Black Tapes.