As I said last time, it’s been almost six months since I had the energy, the focus or the basic self-confidence to do any writing.

I’m not sure that I have any of those things back.

But I’m tired of waiting for them to return. Time to get back to work.

So, in the interests of holding my feet to the fire, here’s an initial teaser from The Obituarist III: Delete Your Account. See? It’s a thing that could eventually exist. 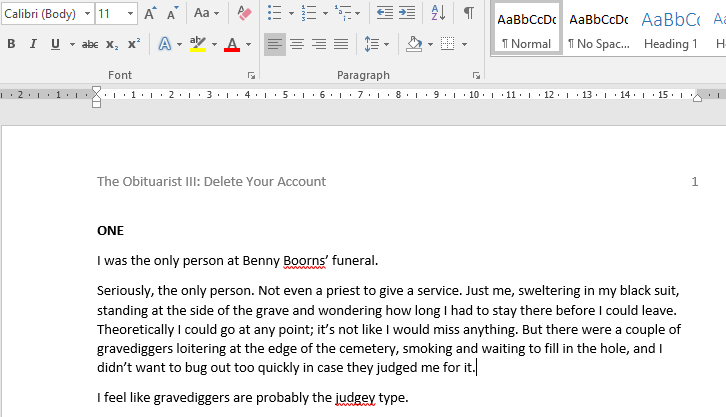 I was the only person at Benny Boorns’ funeral.

Seriously, the only person. Not even a priest to give a service. Just me, sweltering in my black suit, standing at the side of the grave and wondering how long I had to stay there before I could leave. Theoretically I could go at any point; it’s not like I would miss anything. But there were a couple of gravediggers loitering at the edge of the cemetery, smoking and waiting to fill in the hole, and I didn’t want to bug out too quickly in case they judged me for it.

I feel like gravediggers are probably the judgey type.

I moved to the left to get under the shade of a tree and away from the morning sun. It should have been cold, dark and rainy; that’s how funerals work on TV, and what can you trust if you can’t trust television? But the weather didn’t give a damn about Benny, or me, and so it was hot, bright and muggy, even though it was only a little after 9am.

Seriously, who schedules a funeral this early in the day, and during the week? Is that why no-one else showed up? Or did the cemetery manager know that no-one would show up, and thus schedule the funeral for the matinee session, leaving the peak-attendance spots for dead people that the living gave a shit about?

Bah. I was just marking time for show at this point.

I looked down into the grave at Benny’s coffin. It wasn’t one of the giant fancy ones that’s covered in silver filigree and takes six men to carry it; it was plain and it was small, an economy child’s coffin, like a black wooden packing crate that might have held a bar fridge. Benny had been a small man, his growth stunted and twisted by a smorgasbord of birth defects and congenital health issues. His wheelchair weighed twice what he had, and they hadn’t bothered to bury it with him. Kind of a shame; at least that way he could have ridden to the afterlife instead of having to crawl.

Fuck, this was a morbid start to the day. I needed coffee and escape from the presence of death.

‘I know I should say something sad and poignant, Benny,’ I said to the coffin, ‘but it’d just annoy you and make me look stupid. So let’s just call it a day, alright?’ And with that I turned and headed for the cemetery gates.

The gravediggers – burial ground custodian is, I believe, the formal job title – stirred to life, walking back towards the grave as I pulled out my phone to get an Uber. One stomped past me, not bothering to conceal that he was still finishing his breakfast McMuffin, but the other still retained some sense of shame, possibly from a Catholic upbringing, and stopped for a moment. ‘I’m, ah, sorry about your friend. I guess his other friends all had to go to work.’

‘Benny didn’t have any friends,’ I said. ‘He was a really unpleasant, antagonistic person and nobody liked him.’

‘No, I can’t say that I did. But someone had to come and see him off. Might as well be me.’

The gravedigger – sorry, custodian – seemed both confused and offended by what I said, as though a statue of the Madonna had farted in church. ‘Christ, this fucking town,’ he muttered, and went to join his friend in dirt-piling detail.

This fucking town indeed. No argument from me.