I’ve kind of got the shits with myself at the moment.

Sure, I’ve been busy. I have a demanding day job, we just moved house and I like to hang out with my friends so that we don’t forget each other. But we’ve reached a point where those stop feeling like reasons and start feeling like excuses, and the thing they’re failing to excuse is not writing. Shut up, Batman. You’re not even my real dad.

Like many writers, or indeed many folks in general, I am torn between conflicting desires and motivators. For me, those are:

And life for me is a path through these desires, like the stages of grief, until #3 defeats #2 and allows #1 to emerge blinking into the sunlight long enough to bang out the wordcount before retreating back to shelter.

So yeah, I’m behind schedule on Obituarist II: Dead Men’s Data. I was meant to finish it in July, but here it is in late September and I’m only just getting to the point where Kendall Barber [CENSORED CENSORED SECRET REDACTED BUT LORD LEMME TELL YOU IT AIN’T GOOD]. Which is not acceptable.

To fix things, I’m going into what I call BURN MODE, mostly because I like being overdramatic.

Burn mode is when I set myself a specific, easily quantifiable target and then just fucking write it every night that I physically can until I’m done. For Obituarist II, as it was for Obituarist I, that target is one complete chapter of around 1000 words – beginning, middle, end that makes you turn the page to the next instalment. Which is kind of harder than just 1000 words, because everything’s got to be self-contained and wrap up/hook on at the end, and I have to work out an entire, coherent block of plot over my lunch hour, but that also kind of makes it more enjoyable and engaging.

But burn mode is a jealous mistress. If I’m to knock off this story and get it to my editor and alpha readers before heading overseas for this year’s international adventures, I can’t have no distractions. So I’m taking  a break from blogging for about two weeks, and this is my long-winded way of telling you folks that.

It gets the words out of my system. Cut me some slack.

See you when I’m done. But as a parting gift, enjoy this – the first glimpse of the cover of the new book, completed long before it was finished! 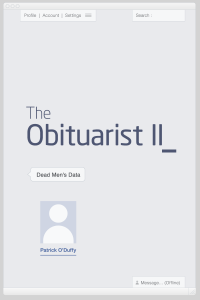 Now get outta my way. I gotta put kerosene in this motherfucker.

One reply on “Burn notice”